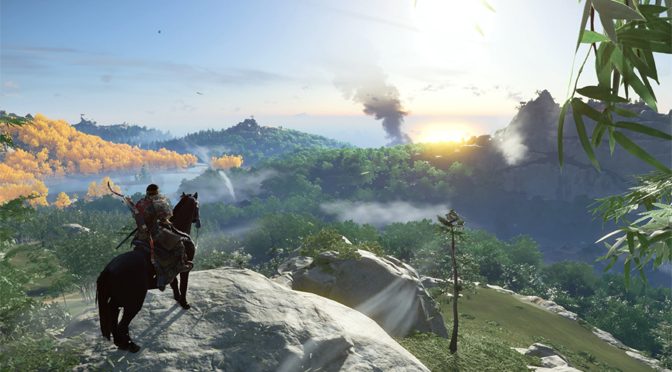 The desire for a Japanese feudal stealth-action game has finally been met thanks to Sony and Sucker Punch taking up the gauntlet to produce the amazing and adventurous Ghost of Tsushima.  This desire has been bubbling ever since we jumped from ancient Jerusalem to renaissance Italy, to colonial America and elsewhere with the Assassin’s Creed.  Thankfully, the wait is over and this game did not disappoint.  From graphics to the storyline to combat, it’s impossible not to fall in love with this game.

The game is based upon the Mongol Empire’s invasion of Japan on the island of Tsushima in 1274.  It follows the Samurai Lord’s nephew, Jin Sakai, who finds his island invaded and devastated by the Mongol Empire.  With Jin’s armor broken, uncle captured and spirit crushed, he must find a way to put together an army that will take back the island.  Therefore, he must work with the few surviving warriors while becoming a mythical legend, the Ghost, to drive fear in the Mongols and provide inspiration for his people.

This game is by far one of the most beautiful games that I have ever seen.  While other games have proven to be more graphically intensive, the art design that uses rich, vibrant colors to captivate the lush landscape stands out.  Not to mention, in cooperating effects to highlight the weather, wind and sunlight.  Thankfully, the photo mode allows you to take shots of these scenes so that you can still enjoy the beauty long after the battle.  Beautiful and gorgeous are the designs; you may find yourself snapping away every ten minutes depending on where in Tsushima your mission leads Jin.

Fighting in Tsushima is very enjoyable and there is an excellent combination of dodging and parrying with hacks and slashes.  Combat has been designed to be robust and engaging.  There’s a nice variation of armor sets and charms, special ghost weapons, special moves and shifting combat stances and the traditional parrying and dodging.    Combat can be viewed on different levels; light attacks can be used to quickly deal with slower strikes, while heavy attacks result in more damage and are great for breaking down the enemy’s guard. There’s a block button to protect you from various attacks and a dodge button to shield you from attacks that you can’t be guarded against.

The whole combat system is kept engaging and exciting, much like the best US online casinos, with stances that you can shift through with just the push of a button.  Upon completing a specific task by Jin, a new sword stance is unlocked which comes with its own set of moves and strengths.  The stone stance is at the beginning and is perfect for swordsmen, with one charged up stab either killing them or causing significant damage.  Later, you will see the water stance, which has more powerful but slower strikes to cut through the enemy’s shield-wielding defenses.

In total, there are four stances and once you have acquired them all, you will be challenged in combat, not only go after your most significant threat but also move to the stance best required, all while needing to play defensively.  Overall, combat at its best is tactical, fast, and chaotic and truly represents the image of the lone extremely skilled but outnumbered samurai.

Ghost of Tsushima is a densely packed samurai adventure with excellent combat and breathtaking visuals.  With its constant introduction of new abilities, it allowed swordplay to remain rewarding, challenging and fun. Overall this open-world action-adventure game will provide you with an all-around good samurai slashing time.