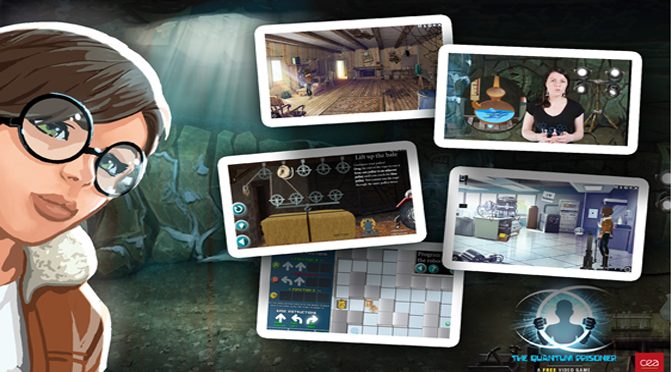 The CEA, a French public scientific research organization, today announced The Quantum Prisoner, an absolutely free browser-based puzzle adventure already popular in France, will be launching in English on October 5th, bringing the fun world of science and technology to a global audience. Featuring 10-12 hours of gameplay, The Quantum Prisoner is designed to make science accessible and fun for everyone, from 12 years old and over and can be played on any sufficiently recent browser with an internet connection – or by offline download or via the Android App, which will be available through the game website on October 5th.

Play as Zoe, traveling to all four corners of the globe on the trail of Artus Cropp, a physician who mysteriously disappeared in the 1960s, to uncover the discovery that may have led to his disappearance – a discovery that will change the world. To progress in your investigation and escape perilous situations, you must solve more than 30 puzzles involving technology (such as operating particle accelerators, fuel cells and robots), and various other branches of science, including environmental and life sciences, physics, chemistry, and maybe even a bit of quantum physics!

“We made The Quantum Prisoner with the help of our fellow CEA scientists and researchers with the sole purpose of making science fun and showcasing scientific and technical culture to a younger demographic,” said Roland Lehoucq, astrophysicist at CEA and scientific adviser of the game. “Don’t worry, you don’t need to be a scientist to solve these puzzles! You learn as you play along, in line with the scientific approach. You will be able to move forward thanks to informative videos and facts along the way, as well as assistance from our researchers if you get stuck”.

The Quantum Prisoner is a browser-based game created by the CEA with the sole purpose of making science fun and more accessible. The game is completely free with no registration required, no ads, and can be played on any browser without the need of downloading a plug-in, unless you desire to play offline. The Quantum Prisoner is designed for players in the 12/13 age range and over but can be enjoyed by players as young as 8 with the help of an adult on some of the more difficult puzzles. Featuring 10-12 hours of gameplay, The Quantum Prisoner takes players around the world on a point and click adventure that walks the line between science and science fiction, with retro graphics and a dose of humour.

First released in October, 2019 in France (only in French), The Quantum Prisoner received praise at Paris Games Week and has attracted more than 100,000 gamers across the country, receiving positive feedback from the players. Given this success, the CEA is now developing the game in English for a wider audience and will release the game to global markets on October 5th.