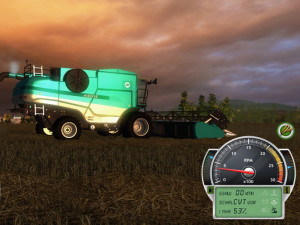 Sticking to the recipe that has so far proved such a smash hit, the Farming Simulator franchise is now moving up a gear! A new graphics and physics engine, new visual effects, a new interface, new gameplay mechanics and, of course, a new and vast game environment; Farming Simulator 15 combines all the right ingredients to offer the richest and most detailed farming experience ever on PC in October of this year, and early 2015 on home console (cross-generation)!

Similar to its predecessor, in Farming Simulator 15 you face the daily challenges of a modern farmer as you grow crops, sell produce, rear livestock and manage and develop your own farming complex in two immense open worlds… with a new Nordic setting!

The game engine in Farming Simulator 15 has been totally revamped, and the game can now display visual effects and graphic rendering that are way ahead of the previous version, in particular using PBR (physical-based rendering) that for example, provides a photo-realistic rendering of the vehicles. But Farming Simulator 15 hasn’t just added some esthetic improvements: besides an exclusive game backdrop but also a new interface, this farming sim also includes extra activities, notably logging! You can now manage forested areas in the game environment using a range of new vehicles and machines designed specifically for this activity: harvesters, chain saws, chippers and even trailers.

This additional equipment joins the long list of agricultural machinery that has been faithfully reproduced from the originals made by famous manufacturers such as Case IH, Deutz-Fahr and Lamborghini that are ready to be put to work. More prestigious brands in the sector are also available; New Holland and Ponsse among others!

As you would expect, Farming Simulator 15 also has an extensive online mode and services that enable you to manage a farm with up to 16 players online or on a local network and exchange numerous “mods” with the community created by the players themselves using the in-game customization tool, including vehicles, equipment and even environments!