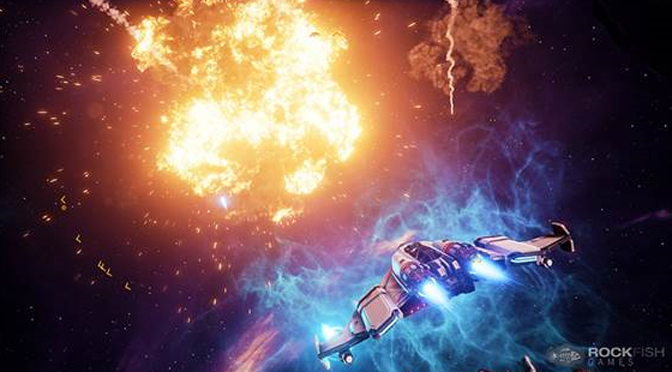 The Hamburg-based indie studio ROCKFISH Games just announced the exclusive Beta of their fast-paced roguelike space shooter EVERSPACE beginning today. EVERSPACE is the most funded German video game on Kickstarter – combined with the financing from the official website over $700,000 US have been raised.

The game has been tested by over 4,000 Alpha backers for three months, and another 4,000 Steam keys will be sent out to all Beta backers today. Alpha backers just have to update their version on Steam to get the latest Beta build. The Beta will be updated continuously until it eventually becomes the final version. Space game fans who are interested in participating in the exclusive Beta of EVERSPACE can secure access until July 31 on the official website: https://everspace-game.com/shop/.

Space pilots will now be able to explore two brand new sectors after they battle their way through the first four, each sector introducing an even greater variety of enemies, natural hazards, planet types, and space stations. To deal with the new challenges, the arsenal of weapons, devices, and consumables has been expanded, offering an even deeper gameplay experience. Many Alpha backers have already clocked over 50 hours in the game and shared some glowing feedback in the Alpha section of the forums which is now accessible to all forum members.

A new gameplay trailer has been released showing off all-new rocky asteroids, improved space clouds and sun flares (the latter are not just beautiful to look at), a new swarm type of enemy, and a massive alien frigate as well as deploying various types of drones.

“We are super stoked about the fantastic feedback from our Alpha backers. We also got lots of great new ideas and suggestions from the community which we were able to implement into the Beta to a large extent. We cannot wait to see how the over 200 new features, tweaks and bug fixes since the initial Alpha release will be received,” says Michael Schade, CEO and co-founder of ROCKFISH Games. “The advance praise from players, the media and influencers alike is not only a great recognition of the whole team’s hard work and dedication, it also gives us high confidence about the upcoming Early Access on Steam, Games in Development on GOG and Preview Program on Xbox One later this year.”