ESL, the world’s largest esports company and part of the leading digital entertainment group MTG, announced today that it will integrate ESL competitive gaming systems and technology into the new Tournaments feature on PlayStation®4 (PS4™) systems. Millions of PS4 owners will be able to find and participate in competitions organized by ESL, available to them at the touch of their fingers. In addition to PS4, tournaments can be accessed for interactions, such as Check-in, through both the ESL Play and PlayStation App.

“We’re incredibly excited to be able to offer this seamlessly integrated solution for the most passionate esports fans. ESL’s mission is to bring competitive gaming to fans around the world, and when doing so, to create an environment that allows them to fully focus on their gaming skills.” said Marcel Menge, Managing Director ESL Technology. “In the partnership with Sony Interactive Entertainment, we’re going to host hundreds of weekly tournaments for players from any corner of the world. Anyone who wants to try their hand at competitive gaming, can now easily do so across a wide variety of titles.” 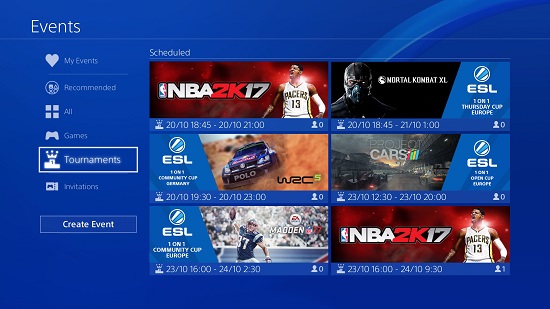 Tournaments feature will kick off the first Major tournament with NBA 2K17, to celebrate the beginning of the NBA season. Mortal Kombat X, Project Cars*1 and more, will be joining the ranks in the future. The integration is global, supporting 15 different languages to enhance competitive gaming on the over 40 million PS4 systems sold worldwide.

PS4 is the world’s top-selling console, with more than 40 million units in consumers’ homes globally. According to a report from the international research firm Newzoo, there is enormous potential for esports growth among console gamers, as only 25% of all console gamers currently identify as competitive gaming enthusiasts.
*1 Titles may be subject to change, and may differ by region.

About ESL
ESL, a part of international digital entertainment group MTG, is the world’s largest esports company, leading the industry across the most popular video games with numerous online and offline competitions. It operates high profile, branded international and national leagues and tournaments such as the Intel® Extreme Masters, ESL One, ESL National Championships and other top tier stadium-size events, as well as grassroots amateur cups, leagues and matchmaking systems. ESL covers a broad field of services in gaming technology, event management, advertising and television production, fully catering to the needs of the esports ecosystem. With offices in North America, Germany, Russia, France, Poland, Spain, China, and partners in many other countries, it has a truly global footprint. www.eslgaming.com