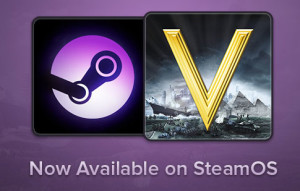 Aspyr Media, in partnership with 2K and Firaxis Games, announced today that the critically acclaimed Sid Meier’s Civilization V, and all available expansion packs and downloadable content, is now available on Linux for SteamOS. The title includes all the same options and features as its Windows PC and Mac predecessors, including Steam Play support. Players will enjoy achievements and cross-platform multiplayer between Windows PC, Mac, and Linux platforms, as well as direct access to the game’s community hub on Steam. This release of Sid Meier’s Civilization V on Linux targets SteamOS and features support for Valve’s upcoming Steam Controller.

“This is the first time that Civilization V has been available on a platform designed for the living room and is a great example of bringing desktop gaming to the big screen” said Aspyr Media’s Vice President of Publishing, Elizabeth Howard. “We’re excited to be at the forefront of an evolving platform like SteamOS and be an early participant in the upcoming SteamBox ecosystem. Opportunities like this allow Aspyr to do what we do best: bring great experiences to growing and emerging platforms.”

Civilization V has taken this definitive strategy game series in new directions with the introduction of hexagonal tiles allowing for deeper strategy, more realistic gameplay and stunning organic landscapes for players to explore as they expand their empire. The engine delivers a spectacular visual experience that brings players closer to the Civ world than ever, featuring fully animated leaders interacting with players from a screen-filling diplomatic scene and speaking in their native language for the first time. Wars between empires feel massive, as armies dominate the landscape and combat is more exciting and intense than ever before. The addition of ranged bombardment allows players to fire weapons from behind the front lines, challenging them to develop clever new strategies to guarantee victory on the battlefield. In addition to the new gameplay features debuting in Civilization V, an extensive suite of community, and multiplayer elements will also be available.

Sid Meier’s Civilization V is rated E10+ (Everyone 10 and older) by the ESRB and is available on Windows PC, Mac, and Linux for SteamOS for $29.99.