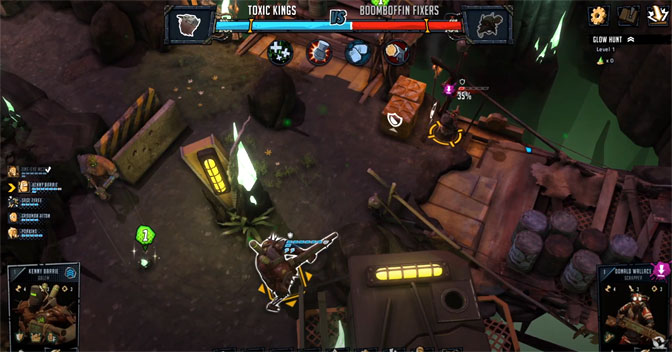 Set in a living post-apocalyptic shared world players can explore Dreadlands by travelling across its many regions with their misfit gang of miscreants and mercenaries. This is a world where players frequently encounter and interact with each other, sometimes they cooperate, other times they’ll pick bloody fights in bloody PvP battles where resources and combat skills will be tested to their fullest. Tactics cards add a strategic layer of abilities to the ensuing engagements, these cards are powerful, and can do everything from instantly reviving downed teammates, to giving an ally an extra attack which could make all the difference between death and survival in a brutal world.

Gang Factions have their own distinct backgrounds, worldview, mentality, culture and of course, current problems that have to be dealt with. Once a crew is picked, the gameplay will thrust the player deeper into the lore, it’s intrigues and many entities that vie for power, or merely survival, in the world of Dreadlands. The full release of Dreadlands will introduce a new gang faction to the game in the form of the Skarbacks.

“During the three years the game has been in development, we have had multiple beta versions that have been played by thousands of players and the community’s feedback in Early Access has hugely helped us shape the game to where we think it’s now ready for full launch,” said Peter Nilsson, Founder, and Creative Director Blackfox Studios.

Dreadlands recent updates have incorporated enhancements across several areas of the game during its Early Access period, including Improvements to the games U.I for a more streamlined flow, levelling improvements with passive and active skills, weapon balancing and the ability to upgrade weapons or re-roll their traits at the workshop. Dreadlands has also undergone a huge visual overhaul to environments and encampments within the game, providing more detail and contrast to the game.

Dreadlands launches on Steam with a 20% launch discount available for one week.