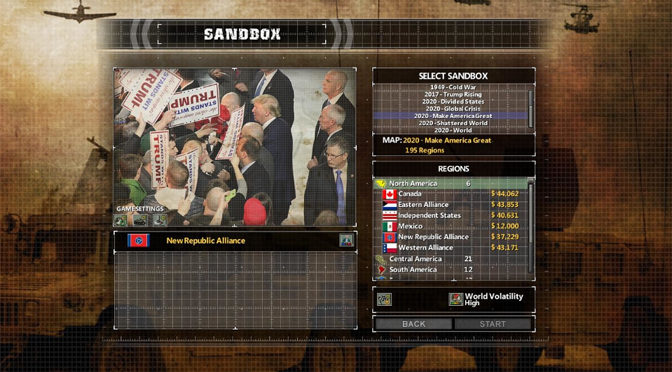 BattleGoat Studios has answered the call to make available new DLC, TRUMP RISING, for its Geopolitical Game Supreme Ruler Ultimate. Commented Lead Designer, David Thompson, “It is with incredible anguish that we feel obligated to provide our players with a new option to our game. We have prided ourselves with our games’ realistic approach to the world but absolutely nothing prepared us for this…”

Lead Programmer, George Geczy added, “”Our games have always excelled at creating a real world simulation with a chaotic future storyline. Now the chaos can feel even more real!”

The scenario is described by BattleGoat as follows:

At first he was dismissed as comic relief and a game show host in a country whose election cycles were long, arduous, and boring. With his bombastic style, he brought entertainment to a process that had long since lost its lustre to a jaded population. However, as the election progressed from Party Primaries to National Conventions and into the General Election, the international community started to take notice, and in some cases, make plans.

And with those words, the world changed…

Within the United States, civil unrest fueled by racial tensions reaches even higher than in the 1960’s. To China and Russia, the new US President seems so unpredictable and reckless that it seems logical to make a pre-emptive strike rather than wait for him to have a ‘bad hair day’ and launch a strike against them. In Western Europe, leaders are shaken by their new reality and realize they may have to make concessions to Russia now that America can no longer be relied upon. In Mexico, and even in Canada, militaries are brought to an unprecedented level of readiness over concern of Trump’s ambitions.

How will this play out? Will you assume Trump’s role as the new US leader and guide America to renewed Greatness? Or will you instead lead another nation and take advantage of a potentially dysfunctional America to further your own ambition? Supreme Ruler Ultimate: Trump Rising will allow you to take control of a nation in 2020 as the world is engulfed in chaos, or start on inauguration day in January 2017 as Donald Trump takes control of the most powerful nation on earth. Manage economic, diplomatic, and military policies, take on ISIS and North Korea, defend the South China Sea, or just build a wall instead.

The DLC is available through Steam, and is free to everyone who already owns Supreme Ruler Ultimate.