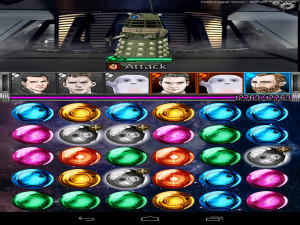 Doctor Who: Legacy , the free to play, gem-matching, puzzle RPG game from Tiny Rebel Games, Seed Studio and BBC Worldwide, is pleased to announce the release of its first major update to the game since launch. Doctor Who: Legacy Version 2.0: Rise of the Master adds the highly anticipated Season 5 of content (20+ hours of new gameplay), a Perk system for greater team customization, Expert mode levels with guaranteed special character rewards, new allies and enemies with new abilities, and much more.

The Perk system unleashes an innovative system for customization, strategy and depth – players will unlock abilities as they collect and level up their collection of allies and as they progress through the game.

Four more incarnations of the Doctor join the game: the First Doctor (William Hartnell), the Second Doctor (Patrick Troughton), the Ninth Doctor (Christopher Eccleston) and the War Doctor (John Hurt), bringing us to a total of ten Doctors now available for free in the game with more on the way.

Doctor Who: Legacy was named one of the 50 best iOS and Android games of 2013 by The Guardian and has received rave reviews from Doctor Who fan sites, mainstream and gaming press alike. It has also been cited by Digital Spy and others as “one of the more moral free-to-play games when it comes to how it treats its players.”

Wonderfully addictive and intuitively easy to pick up and play, it is highly accessible even to those with no knowledge of the Doctor Who universe. Team up with the Doctor and head back through time – revisit your most-loved episodes from the TV series and build a team of your favorite companions and allies including Clara, Rory, Amy, River, Sarah Jane, Captain Jack Harkness, Ianto, Martha Jones and dozens more, each of which has their own abilities to help you solve an infinite number of puzzles.