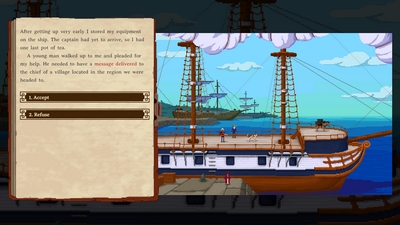 After a very successful spell on Early Access it is now time for the official launch of The Curious Expedition. German indie studio Maschinen-Mensch today confirmed September 2nd as the launch date of their roguelike on PC, Mac and Linux. It’ll be available on Steam, GOG and the Humble Store for $/€ 14.99, with a 15% discount during the first week on sale.

The Curious Expedition is a roguelike expedition simulation set in the late 19th century. Together with famous historical personalities, players will venture on unprecedented expeditions to regions never explored before for fame, science and treasures. They will put on their pith helmets and khakis and make their way through a lush, procedurally generated world full of wonder and mystery.

The game was first released as an alpha version in May 2015 on Steam Early Access. During the Early Access phase is has been continually expanded and enhanced by the developers, incorporating valuable community feedback and developing a devoted fan base. The Curious Expedition has sold 25,000 copies so far (fully recouping production costs) and has already been nominated for various awards, including prestigious German awards including: “Deutscher Computerspielepreis” (German Computer Games Awards; category best youth game) and “Deutscher Entwicklerpreis” (German Developer Awards; categories: best browser game, best indie game, best game design, best german game). It also won the “Deutscher Entwicklerpreis” award as best indie game in 2015.