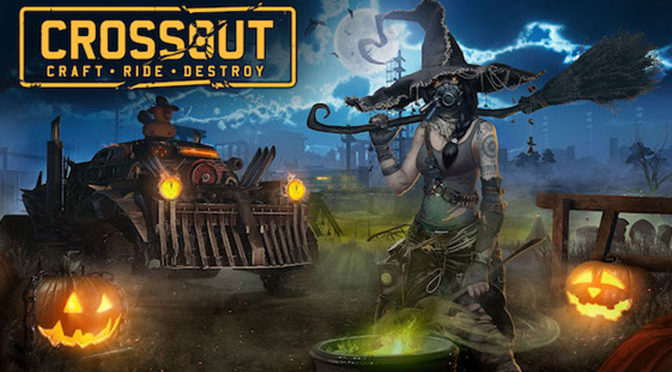 The Halloween season has already begun in Crossout, the post-apocalyptic Action MMO. From October 19 through November 9, players will be able to wage battle on the all-new night map Sector EX, compete in the new ‘Witch Hunt’ PvP mode, and earn ‘Hazardous Sweets’ that can be traded for exclusive seasonal vehicle decor.

In ‘Witch Hunt’, players have to attain festive Halloween Pumpalloons and keep them in their possession for as long as possible. All participants are equipped with an identical, unarmed vehicle and can steal the Pumpalloons by ramming the current possessor. Even without conventional weaponry, ‘Witch Hunt’ is anything but peaceful. All vehicles come equipped with six powerful Jet Boosters that provide an explosive burst of speed to ram your opponent when attempting to loosen an opponent’s grip on the precious Pumpalloons. There is no reason to hold back – in this mode, respawns with new vehicles are unlimited.

Halloween also brings with it the first night map added to Crossout – Sector EX – where survivors fight for control over an abandoned industrial complex located at the center of the map. While the defenders will be able to take positions on multiple floors of the complex, attackers can find their way inside through a maze of corridors and driveways. With darkness limiting the view, combat on Sector EX gets up close and personal – even for heavy trucks with long-range armament.

During the next three weeks, victories in all Crossout PvP modes and the completion of daily tasks will earn players an extra reward in the form of ‘Hazardous Sweets’. While not fit for human consumption, they are useful to craft ‘Fright Containers’ through which survivors can obtain exclusive decorative items for their vehicles, as well as paints, car horns and player avatars. Those survivors that place no importance on appearance can, of course, sell the ‘Hazardous Sweets’ for profit on the market.

Check out the Gameindustry.com beta review of Crossout.