Lakeshore Records in conjunction with Frederator Studios will release the CASTLEVANIA—NETFLIX ORIGINAL SERIES SOUNDTRACK digitally on July 7th. Featuring an original score composed by Trevor Morris (The Tudors, Immortals) and produced by Morris and Trey Toy, the music is inspired by the classic video game series Castlevania –a dark medieval fantasy following the last surviving member of the disgraced Belmont clan, trying to save Eastern Europe from extinction at the hand of Vlad Dracula Tepes himself. The animated series is from Frederator Studios, a division of Frederator Networks, Inc., a Wow! Unlimited Media company, written by best-selling author and comic book icon Warren Ellis and executive produced by Warren Ellis, Kevin Kolde, Fred Seibert and Adi Shankar. Castlevania debuts globally on Netflix July 7th. 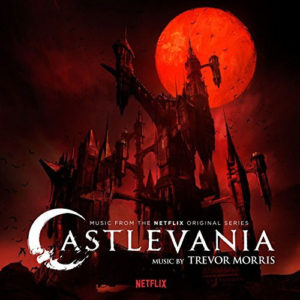 Trevor Morris is a Canada-born Los Angeles-based two-time Emmy Award-winning composer. He’s collaborated with Jerry Bruckheimer, Neil Jordan and Tony and Ridley Scott and has over fifteen feature film credits including Immortals & London Has Fallen, and has been involved in twenty five Prime Time television series including The Tudors, The Borgias. Morris has also worked as a composer on a number of video games including SimCity Societies, Army of Two, Need for Speed: Carbon and most recently the epic third installment of Dragon Age: Inquisition video.

Grab a copy of this amazing Castlevania soundtrack from Amazon!

Says Morris: “Being asked to contribute to Castlevania was such a great call to get. As a composer it’s just a cool, colorful and interesting world to get into, and provides endless inspiration for music. It was just such a fun and cool project to work on, I could score Castlevania for years and years”

Says Warren Ellis: “Trevor is a master of his art: hugely innovative, yet with a deep understanding of early music, combined with a love of electronics, creating something weirdly primal but completely contemporary.”