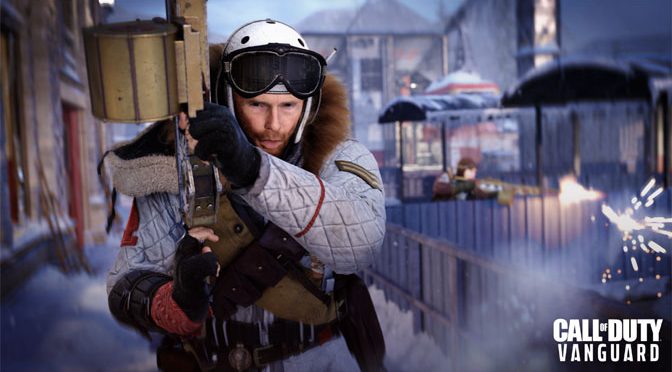 Get ready for a massive free content drop on February 14th, when Call of Duty: Vanguard and Warzone kick off Season Two. The latest season of free and additional content brings armored war machines and chemical weapons to bring global conflict to a new level. Join Captain Butcher and Task Force Yeti in discovering the greatest threat to the world: Nebula V. Eradicate or harness this weapon in Warzone, prove your elite skills in Vanguard Multiplayer, or enter all-new areas in the Dark Aether to face a deceptive force in Zombies. Once both Vanguard (Feb 10 @9am PT) and Warzone (Feb 14 @9am PT) updates are downloaded, fans can enjoy double XP across both games to celebrate the launch of the new season.

• New Features: Nebula V, Redeploy Balloons, and More. Nebula V Ammo and Bombs create new offensive tactics, while Portable Decontamination Stations offer temporary refuge. Alternatively, take to the skies with Redeploy Balloons and Bomber planes.
• Explore the Chemical Factory and underground Chemical Weapon Research Labs, Watch for Armored Transport. Fresh points of interest in Caldera are here to shake up those rotations. Axis soldiers patrol these new areas and are found around the island in vehicles…Defeat them for powerful rewards.
• Caldera Clash at Launch, Rebirth Reinforced Midseason. The massive team fight returns — rank up those weapons and fight for Caldera outside of traditional modes. Meanwhile, there are rumors of a resurgence at Rebirth Island…and we’re not talking about the game mode.

• S.O.T.F. 007 reports for duty. Task Force Yeti is the first line of defense against Nebula V. Start Season Two strong with Anna Drake, available in the Battle Pass.
• Four New Weapons. Two midrange tools can be found in the Battle Pass, while the Ice Axe and a hard-hitting SMG are slated to drop during the season.

• Prove yourself in Ranked Play. Launching alongside the 2022 Call of Duty League season, expect to begin your Ranked journey and play like the pros.
• Two new Multiplayer maps. Duck through the busy streets of Casablanca or partake in some ski-shooting in Gondola, two midsized maps ready to be mastered.
• Free Perks, Killstreak, and Equipment in Battle Pass. Prepare to switch up those Loadouts and shoot for a 12-Killstreak — the Season Two Battle Pass is stocked with free Multiplayer content for all to use.
• Celebrate Valentine’s Day in Vanguard with a themed experience with some Double XP opportunities
• Arms Race and Vehicles. An Arms Race with Armored War Machines is bigger than infantry combat, it’spiloting Motorcycles, Squad Transport Vehicles and tanks.

• Dimensions shift and the Dark Aether opens. The undead assault heats up in Egypt’s Eastern Desert, where a portal to the Dark Aether opens alongside other new arenas
• A new Artifact gives you strength to conquer the Deceiver. Vercanna the Last joins the fight to tend to your squad’s wounds with Healing Aura… and aid against the three-faced Zaballa the Deceiver.
• Wonder Weapons to aid with new Objective & Story Quest. Wield the Ray Gun and Decimator Shield alongside new armaments as you partake in Sacrifice and uncover the secret to defeating Kortifex.

Check out the detailed Call of Duty blog post about Season Two.