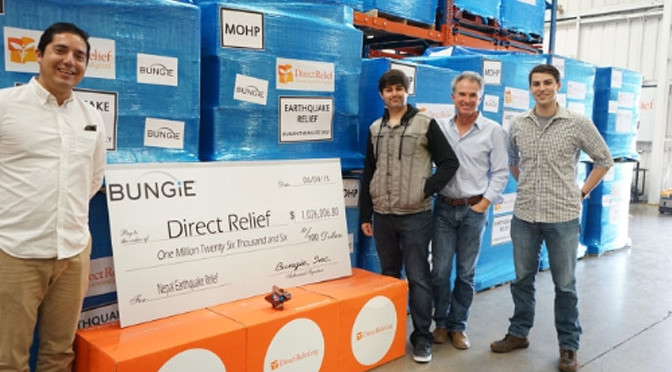 Several of Bungie’s community members who helped raise money for earthquake relief and recovery in Nepal through gaming company Bungie were at Direct Relief headquarters Thursday to present a check for more than $1,000,000.

The donation makes the Seattle-based Company and developer of popular games, including Destiny, the single largest financial donor to the medical aid organization’s Nepal response efforts.

“As a gamer, we spend our time pretending to save the world. It’s good to get an opportunity to save an actual part of the world through giving,” said Eddie Moreno, a Santa Barbara gamer who participated in the Bungie campaign.

The total $1,026,006.80 for medical relief in Nepal was raised when gamers purchased special t-shirts and a shader and emblem for their in-game character.

“The Bungie community’s amazing support will translate immediately and directly into help for people in Nepal who experienced a tremendous blow, are in a very difficult and more vulnerable situation now as monsoon season nears, and also have a long, tough road ahead,” said Direct Relief CEO, Thomas Tighe.

“Every penny will be spent to help strengthen essential health services that were needed before the earthquakes and much more so now.”

To date, Direct Relief has sent more than 119,000 pounds of medical aid supplies to Nepali-based organizations caring for survivors of the 7.8 magnitude earthquake that struck on April 25 and subsequent 7.3 magnitude quake that hit on May 12. Direct Relief is preparing additional emergency shipments that will be delivered on a chartered cargo flight next week.

“It’s great to see where all of it is going. I’m proud to be one of the 50,000 people who bought a shirt,” remarked Moreno after learning more about Direct Relief’s response effort.

Bungie is a new donor to Direct Relief, however they have a history of charitable giving that dates back to Hurricane Katrina.  Their executives reported that the campaign for Nepal is their most successful charitable initiative.

“When disaster strikes and aid is needed, Guardians are powerful allies to have on your side,” wrote Bungie in an update to their community. “You’re our pride and joy, Destiny Community. We’re in awe of you every day, and we thank you.”

The gamers said they look forward to more ways they can be a part of charitable efforts through Bungie’s games.

“We really hope that we get to have another opportunity like this again for a much more positive thing rather than just doing it for an emergency,” said Raul Aguirre, a Destiny gamer who helped present the check. “To all the fellow gamers out there, if you’ve donated, it means a lot.”