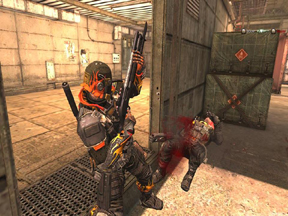 One of Dizzel’s biggest draws is its visceral, hardcore action, featuring ‘Executions’ that give players the ability to perform a variety of unique fatalities on nearly dead foes, depending on the character and weapon they happen to be using. These Mortal Kombat-esque finishing moves can be unleashed in a variety of inventive game modes, which feature the ability to play as killer mechs or powered-up boss characters, or even engage in four-team firefights. From unloading your assault rifle in the face of your enemy to hacking them to bits with a giant axe, Dizzel’s bloodlust knows no bounds.