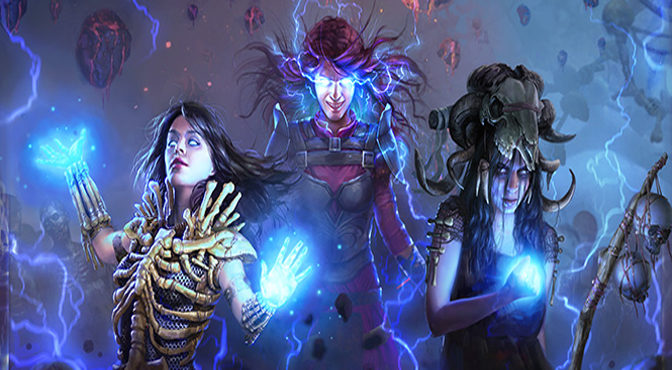 After you complete the Labyrinth for the first time, you get to make the important decision of which Ascendancy Class you want to play. If you’re playing a Witch, this gives you three interesting options to choose from: Necromancer, Elementalist, or Occultist. In this article, we’re going to be discussing some of the pros and cons of the Elementalist build, and offering some pointers on how to begin equipping your character with the right combination of PoE items to enable you to do the most damage with the elemental forces at your fingertips.

An Overview of the Elementalist Ascendancy Class

As the name suggests, Elementalists make use of the forces of nature to spread death and destruction across Wraeclast. For the hotheads out there, you can try using a build centered around fire spells like Firestorm or Flameblast to incinerate your enemies. Or, if you’ve a colder heart, you can render your foes hypothermic with Frostbolt, Freezing Pulse, or Arctic Breath. For those who prefer something a bit more shocking, why not give Discharge or Herald of Lighting? Whatever your elemental flavor of choice, you can count on the Elementalist to tear through basically anything in your way.

o   6% increase to all Elemental Resistances

The common denominator among all of the minor skills is a 10% increase to elemental damage, which makes sense since elemental damage is the bread and butter of the Elementalist. Beyond that, the different passives lead to some interesting and diverse playstyles based on which one you pick. Based on your choice of minor skills, you will have access to a different array of other, more powerful skills.

The following table is based on information from the PoE Wiki, and does a good job of mapping out the potential advanced skills for each minor skill, as well as the effects of those skills.

Spell Choice for Your Elementalist

The hallmark of PoE is the gem system, thanks to the manner in which it lets you customize your character with many different builds. This allows different players wide latitude to experiment with how they play the same base class/Ascendancy combination. As I hinted at above, you can play an elementalist who uses fire, cold, or lightning spells – or as one who uses a hybrid of them.

A lot of really talented players have graciously shared their builds on the official PoE forums, and I highly suggest you check them out. Rather than really digging into the complexities of various build options here, here is a quick discussion of a few of the builds that sounded the most effective and fun to play from a quick search through the forums.

The first Elementalist build to stand out to me was “Mjolner Rainbow Rambo,” put together by forum user Simplesim45. According to its creator, this build boasts “max spell block, instant heal, almost permanent physical immunity, good clear speed, flashy skills, [and] the fun factor.” Basically, you run around like Thor shooting lightning everywhere using the Discharge and Arc spells, and smacking things with a big hammer. In addition to Mjolner and these spells, Simplesim45 provides a detailed list of other spells and PoE items to use to make your character stronger and more survivable.

Another Elementalist build that caught my eye was the “Magma Orb Elementalist” by forum user Masayume2. The Magma Orb Elementalist can pump out about 635,000 Shaper DPS, and up to 912,000 DPS on trash mobs. This is a pretty straightforward build that relies primarily on the Magma Orb spell to fill the map with great balls of fire that chain off each other and incinerate everything in sight. Check out Masayume2’s build for details on the other spells and PoE items he uses to round out the character.

For today’s third and final Elementalist build recommendation, check out “Only Noobs Need Vaal Pact: The Cast on Ignite Build for Your Holiday” by forum user CaptainWARLORD. Not only is the build pretty epic, but CaptainWARLORD presents it in a pretty unique and comically written guide that is definitely worth checking out. Essentially, the build utilizes the Cast when Damage Taken, Firestorm, and Chance to Ignite spells to throw out constant, passive fire damage to incinerate everything in sight with minimal input or stress on your part.

That does it for today’s discussion of the Elementalist – one of the Ascendancy classes for the Witch. The three builds showcased above are only the tip of the iceberg when it comes to the depth of crazy, fun customization possibilities for this class. Be sure to check back later for more builds, or browse the official PoE forums to learn how to be the best Elementalist you can be!