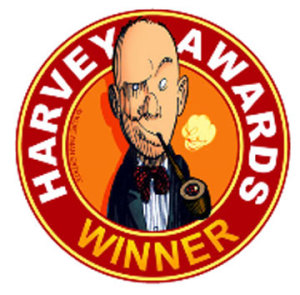 Named in honor of Harvey Kurtzman, the Harvey Awards recognize outstanding achievement in the field of comics, and is the only industry award both nominated and selected by comic professionals. First awarded in 1988, it is one the industries oldest and most respected awards.

Writer and Executive Producer Michael Uslan, best know as the man behind the Batman series of movies, acted as host and Master of Ceremonies for this year’s event.

This year’s winners include:

In addition, the Baltimore Comic-Con would like to thank those individuals who presented at this year’s award ceremony, including: Joe Morciglio, Matt Gagnon, Gerhard, Denis Kitchen, Lora Innes, Fred Hembeck, Cully Hamner, Tom Brevoort, Nick Barrucci, Warren Simons, Laura Martin, Peter Tomasi, Steve Geppi, Louise Simonson, Dave Bullock, and John Cassaday. We would also like to thank Mark Wheatley for his contributions to our voting ballots, program guide for the evening, and awards ceremony presentation, and Glenn Hauman for his “web mastery”.

The Baltimore Comic will host the Harvey Awards for the ninth year during the 16h annual show, taking place September 25-27, 2015.