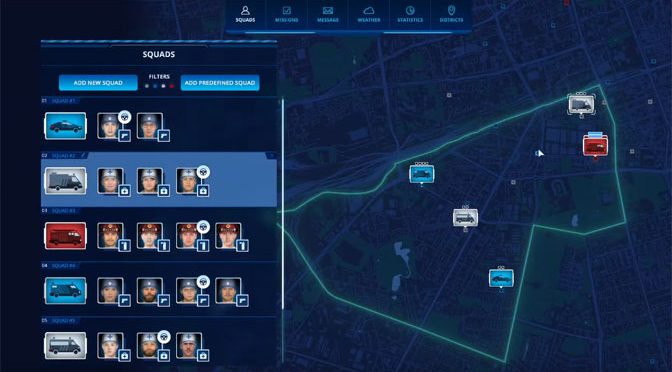 112 Operator – the sequel to an award-winning 911 Operator – is on its way to Steam and will launch on the platform on April 23rd. Take on the role of a person behind every action in the emergency department. Receive calls from people in various situations, usually requiring immediate intervention from the police, fire brigade, or paramedics. Observe the weather conditions or traffic situation and plan your operations accordingly. Remember that many potential tragedies depend on these factors. Always be ready and waiting – your first aid instructions and timely unit dispatch could save someone’s life.

Manage units in your real-world location (or any location in the world) with huge maps of real cities, now also with 3D buildings. Check out the new set of available events, from minor incidents to global-scale cases. Test out the completely redesigned campaign mode with a story, objectives system, and emails.

Enjoy rich gameplay with dynamic traffic systems, changing seasons, and day and night. Deal not only with crime and humanity’s own accidents but also with major cataclysms such as large fires, which will require dozens of units. Remember that depending on the region in which you operate, the incidents you encounter will vary significantly due to your country’s laws or the current district’s characteristics. Recruit new team members, dogs, robots, and additional dispatchers to relieve yourself of some of the workload.

112 Operator is a real-time strategy game where you manage emergency units and receive calls from people in different situations, usually requiring urgent intervention. Remember to react accordingly, as you will be dealing with both people in need and pranksters. Not every case will require an ambulance, and sometimes a simple instruction can save someone’s life. Deal with problems caused by humans, as well as those resulting from the weather, traffic situation, or current season. Help the city survive cataclysms and natural disasters. Save as many lives as possible.

Help others on a scale 25 times larger than in 911 Operator, and work on completely different layers. Keep order in a single neighborhood or coordinate several operators in the world’s major metropolises. Use 3D visualizations and choose from more than 100,000 areas, such as districts or municipalities, and tens of thousands of real cities around the world.

To all units: a storm is coming…

Face the dynamically changing weather, generated from authentic, historical data. Watch the incidents change from day to night, as traffic increases, and seasons pass. Watch out for extreme conditions that can lead to catastrophes and natural disasters. Put out big fires, catch criminals associated with terrorist attacks, or gangs involved in conflict.

Take calls from people in various situations, needing emergency services’ help. You never know who is on the other end of the line. You might hear a frightening murder story, have to instruct someone on performing CPR, or mind your temper while dealing with an annoying prankster. Answer over 60 new calls, each with voice-overs.

112 Operator is still in development with a Steam release date set for April 23rd.