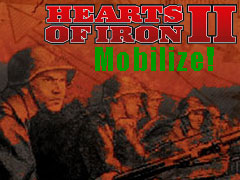 Now is the time for all good men (and women) to come to the aid of their (chosen) country. It's nearly time to launch the next offensive.

January 4th is a day that most strategy gamers have been awaiting with great anticipation because that is the day Hearts of Iron 2 ships to stores and gives us another chance to fight World War II. We cornered Vice President of Paradox Interactive Fredrik Lindgren to ask him about how HOI2's attack on the market would be different from its critically acclaimed predecessor.

GiN: For those not familiar with the Hearts of Iron original game, can you explain what is meant by saying it is a game of Grand Strategy, where more than just the battlefield commander roles are explored?

Lindgren : Grand Strategy means that the war is fought on a division level, and that you take full command over the production, technology research and policies of the nation of your choosing.

GiN: With Hearts of Iron having such a huge fan base, expectations are high for the sequel. Does this put a lot of pressure on your development team?

Lindgren : There has been great pressure on the team to create a high quality game, however the biggest pressure has been coming from within the team itself. Since day 1 they have all been completely focused on creating a great game.

GiN: When the original Hearts of Iron came out it really revolutionized strategy gaming. Then the platinum edition added to that. Is Hearts of Iron II more of an add-on, or will is it another quantum leap forward?

Lindgren : Hearts of Iron is a completely different game than its predecessor. Most of the basic elements have been changed to make the game smoother and give the player a better gaming experience. Our goal for Hearts of Iron 2 has been to make it easier to learn but harder to master than Hearts of Iron.

GiN: How many countries will you be able to play in HOI2?

Lindgren : You can choose from more than 175 different countries, playing up to 32 simultaneous players in multiplayer!

GiN: How different of a game can a player expect when playing say, Russia or Luxembourg?

Lindgren : As Luxemburg, you can expect to be annexed by Germany in 1939. For the Soviet Union you can choose different strategies to succeed. The Soviets are rather interesting to play, given it is spread over two continents and commands a great army. Playing smaller countries is a much bigger challenge than in Hearts of Iron.

GiN: Looking at some of the screenshots from the game, the graphics really look sharp. Was there an emphasis on giving HOI2 a new look?

Lindgren : We wanted the game to feel fresh and at the same time still keep the World War II feeling. We felt it was important to change the look from the first game. Mainly to separate the two games, but also to make the interface easier to learn and reduce the micromanagement parts of the game.

GiN: Although Hearts was critically acclaimed, there were some areas that many players found difficult to use properly including convoy management and trading on the world market. Have these areas been changed for HOI2?

Lindgren : The player can let choose between letting the AI handle the convoy system, or doing it himself. The trading system is also completely changed, removing the "world market" from HOI. In HOI2, trade is handled through bilateral trade agreements between countries.

GiN: One of the most exciting changes from the early beta looks to be the way players handle technology research. Can you talk a bit about how the concept of research teams work in HOI2, and also how the addition of historical scientists will improve gameplay?

Lindgren : Each country has a certain number of tech teams; the Industrial Capacity of each country defines how many active tech teams the country will be able to have in production. The tech teams are real historical researchers and companies from the 1930s and 40s, all specific for each country.

GiN: We noticed that all the world leaders in the game, in addition to most of the military and more minor political leaders have pictures with their names. How long did your team have to spend collecting all those photos and doing all that research?

Lindgren : Too much time (smiles). Seriously, we think that detail adds a lot to the gameplay and therefore it is important to have the correct names of generals, leaders and scientists. As long as our players appreciate this level of detail, we can't spend enough time researching it. We also have a big network of researchers helping us a great deal.

GiN: One major controversy surrounding the original HOI was the game getting banned in China. Mostly when we report about games being banned they are of the violent Grand Theft Auto type, and not a historically accurate simulation. Did China ever explain why the original game was banned and do you expect HOI2 to also be banned there?

Lindgren : China banned it due to the fact that Tibet is a playable country in the game, and a few other (historically correct) details. Since we refuse to change the game for political reasons, we expect Hearts of Iron 2 to be banned in China as well. Our reputation and integrity is more important than any potential revenue we would get for changing the game.

GiN: You have a large fan base. Did a lot of their input go into HOI2?

Lindgren : We have listened a lot to the HOI players when developing HOI2. At the same time we had a clear vision about what we wanted to include in HOI2 to make it a great game. The final version is a mix of Paradox game design and gamer input.

GiN: What new feature do you think players of the original game will be most excited about with Hearts of Iron 2?

Lindgren : I think the battle scenarios are a great addition to the game. Each scenario can be finished in two to six hours and are excellent for multiplayer sessions. The option of co-operative multiplayer is another detail I think will appeal to most players.