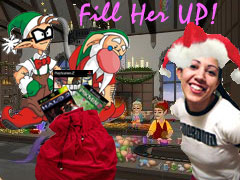 The intolerable din of Salvation Army choirs accompanied by the familiar rattle of coins and bottle tops in a charity bucket, plus more perfume adverts than is humanly or humanely necessary, means it must be Christmas. Along with the terminally depressing fact that the Regent Street lights are forever doomed to be a glorified marketing opportunity, akin to the toys received with a McDonalds Happy Meal (this year's effort being sponsored by The Incredibles) Christmas is also time for me to look back on a year of gaming.

See it's not all cynical commercialism my dear play chums.

The year 2004 hasn't been too shabby to us gaming types. After a slow start, we had quite a decent spring, followed by a typically barren summer, and then things just got crazy. Autumn's been crazy and we're probably all juggling a few titles at the moment and cursing the fact that our gaming time has been taken up with Christmas shopping for those we love. I've done all mine online, so now all that's left to do is prepare my shrine to the mail gods and say a little prayer at sunset each day.

This year really kicked into gear when Baldurs Gate II arrived on the scene. Fans of the first incarnation were rewarded with more of the same, plus a few more additions. The water still looked great and there were more dungeons, caves and taverns to frequent. The ability to tinker with the look of your character before adventuring was a welcome addition. This time around, weapons could be enhanced with gemstones to give them crazy names like the Silver Necromancer of Doom (I made that one up). Unfortunately, the adventure was over far too quickly and we were all left wanting more.

My game of the summer was Harvest Moon: A Wonderful Life – one of the few that isn't a sequel. If someone had told me farming sims were fun, I'd have laughed in their sad little faces. However, Harvest Moon is gentle lesson in farming and gave me many a pleasant afternoon pottering in Forget Me Not Valley. Brushing my livestock was very rewarding, especially when Flossy, my sheep, gave me a golden fleece to sell at market. Similarly, Animal Crossing finally came to Europe and we could all revisit the joys of simulated fishing and gift-giving.

EA threw cold water on all this cute sentimental stuff with Burnout 3. I didn't think the Burnout series could get any more fun, but somehow, EA managed to ram it in. Acclaim left us one great thing before it passed on and this was the crash mode in Burnout. EA threw money at what was already a great idea and just embellished it to the max. I have to say this is probably the most fun I've had all year and that's saying something considering the bumper crop 2004 has given us.

This year has been the year of the eagerly awaited, the hotly anticipated and the long overdue game. These could only be (in no particular order) Halo 2, Grand Theft Auto: San Andreas, Fable and Half-life 2.

Let's begin with Fable. A game that isn't a sequel or a movie license is such a rarity and when it really works it's a joy to behold. Fable was almost everything I wanted it to be and breathed a lease of new life into the RPG. It's true, RPGs don't have to be like homework! They can actually be fun and you don't have to be trapped in pointless battles every five paces. The humor, the gorgeous graphics and apparent freedom all lead to one of the most unique games of the year. Bless Peter Molyneux for continuing to innovate and sometimes getting it so right!

Rockstar's GTA is one of the few that managed to survive the hype and come up smelling of roses. We all wondered if Rockstar could do it again and they have. San Andreas carries the mantle of Vice City and adds a little more bling. This is another revolution in the RPG genre. With muscles to pump, fighting moves to learn and cars to pimp, GTA sits alongside Fable as one of the games that is dragging the RPG kicking and screaming into the 21st century. As always, the script, the music abd the genius adds up to near perfect gaming.

PC gamers haven't been left out in the cold this year when it comes to gaming greatness. Having merely dipped the tip of a dainty toe into Half-life 2, I don't have much to say other than it is everything they promised it would be. HL2 is a new era in graphics and that PR favourite – immersive gaming.

Of course the most hotly anticipated and hyped game of the year had to be Pikmin 2 – just kidding. I'm kidding! I mean Leisure Suit Larry of course – okay so it doesn't work twice. Halo 2. We all wanted Halo 2 and we waited and waited. Finally it came and the world was a goodly place once more. The Covenant, the Flood, Cortana, Master Chief; they were all there and it was fantastic. Bungie was trying to improve on perfection and even managed to do it on some levels. The environments were gorgeous and we all took a wild ride, but were cheated out of an ending – cruel treatment for legions of loyal fans. But the optimists among us are hoping for more news from Bungie in the New Year.

We really have been spoilt this year and I haven't even mentioned Pikmin 2 and Pro Evolution 4 yet! Then Nintendo brought out the DS and with that has come more innovative fun in the form of Feel the Magic.

Looking back we should be feeling pretty good about the state of the industry. And just think – next year we get Xbox 2! But enough of the next big thing, let's take this opportunity to sit back and enjoy what we have now, because it doesn't get much better than this…does it?