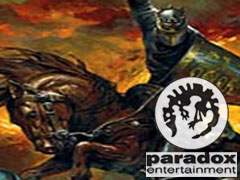 September is here and that means it's just about time for Crusader Kings, one of the most intense, historically accurate strategy games ever created. With a credit of in-depth strategy titles under their belt, like the much lauded World War II title Hearts of Iron, expectations are high for Crusader Kings. Paradox Entertainment's newest title takes place in an extremely volatile time in human history, as Europe is just clawing its way out of the dark ages. It will take a powerful leader and diplomat to bring their fief to the modern era, and an even stronger one to mold together the nations we know today.

We challenged Fredrik Lindgren, Head of Sales and Marketing for Paradox to an interview. We chatted about the strategy genre, real time versus turn based games, how Crusader Kings was different from any other strategy game every created, and how in the world they got so much historical detail into the title.

GiN: When did Paradox Entertainment get its start at making games?

In its current form, Paradox Entertainment has been active since 1999. The first international title was Europa Universalis.

GiN: Most of your titles are very strategy oriented. Did board games have any influence on
your decision to bring that level of strategic thinking to the computer world?

Lindgren: Most people at Paradox are board game buffs, and have enjoyed titles such as Axis & Allies, Diplomacy, Squad Leader and World in Flames. It feels natural to bring the strategy thinking of board gaming unto the PC platform. This also explains the recent licensing of Diplomacy and Squad Leader brands for the PC.

GiN: Paradox has become known worldwide for making the most detailed strategy games on the market. Where does your new title, Crusader Kings fit into the spectrum of strategic complexity compared to your other famous games?

Lindgren: Crusader Kings can be described as a mix of all our previous titles, in levels of complexity it most resembles Europa Universalis. The game adds new and interesting opportunities for the player to build a dynasty, through warfare, marriage or simply by deceiving your liege lord and usurping his crown.

While the learning curve is not that steep, mastering the game is substantially harder. Since you play a character rather than a country, you need to plan ahead more so than compared to our previous titles. If your character dies unexpectedly and is succeeded by a megalomaniac son, your game may soon turn into a complete disaster.

GiN: Can you tell us a little bit about the historical timeframe that is the setting for Crusader Kings? Was it a volatile time in history?

Lindgren: The medieval period was one of constant change. Feuds between and within families, the Crusades, the Bubonic Plague, the Mongol onslaught and the interactions with Moslems made times insecure for most men.

GiN: There have been a lot of books lately like The DiVinci Code that have put a spotlight onto the crusades and that time in history. Do you think there is a large audience now for a game like Crusader Kings?

Lindgren: The medieval times has been popularized not only through books like Brown's "The Da Vinci Code" and George R.R .Martin's fantasy tale "A Game of Thrones," but also through films like "King Arthur" (even though it takes place earlier). The spirit of the medieval inspires people to take part in the power struggle and the treachery of medieval times, paving way for the predicted success of Crusader Kings.

GiN: Unlike Hearts of Iron, the mainstay of Crusader Kings is not combat, though it will likely play a big part in gameplay. Do you think managing family relations and diplomacy between your neighbors and the church is something that strategy gamers will be able to embrace over combat as the game's centerpiece?

Lindgren: While combat is not the central part of gameplay, the intrigue and diplomacy is just as challenging and interesting as the actual warfare. The depth of the intrigue is unprecedented in strategy gaming and should be praised by hardcore and casual gamers alike. As you choose both your initial title (King, Duke or Count) and your level of involvement in court intrigues, you will also control the level of difficulty of the game.

GiN: Do you think being successful as a player in Crusader Kings will require a slightly different skill set than with other strategy titles? Do you think that will be a main appeal for the game?

Lindgren: Planning ahead is not only encouraged, but crucial to succeeding in Crusader Kings. The balance between keeping your Vassals and Allies happy as well as your army strong and treasure coffins full will put our gamers to the test in more ways than one. As usual, I am sure the level of detail put into Crusader Kings will appeal to our core audience, but also to casual Strategy gamers.

GiN: Since you make strategy games, I thought I would ask if you had an opinion on real-time versus turn-based games? Have you given any thought to making a pure RTS in the Command and Conquer vein, or do you think that strategy is less evident in a RTS environment?

Lindgren: At Paradox we are constantly looking for ways to expand our portfolio, and while we currently believe we have combined the best of turn-based and RTS elements we try to keep an open mind to future demands of the market.

GiN: Looking at Crusader Kings, there is an incredible amount of detail. I just played a game as the small providence of Cornwall in what will eventually become the country of England. I noticed it has notes on my lord's personality and traits even though he was a minor official at best, plus data on his wife and all their children, and even court officials. How accurate is this information and how much research must have went into putting it together?

Lindgren: All the characters in the game are correct, but the traits are mainly based on the facts believed to be accurate. While we would not encourage anyone to base his master thesis on the character traits of each individual, we feel confident about the historical accuracy of the character name and title. Our historical researchers have performed very in-depth research to secure the feeling of real medieval times.

GiN: I imagine with any specialized game developer that you have a large legion of fans, and that they are pretty vocal at times. What kind of feedback do you typically get for an in-depth strategy title like this one?

Lindgren: The feedback is of course different from person to person. Having fans as vocal as ours is a true testament to the level of commitment we have among our core gamers. Most people enjoy the level of detail put into the games, as well as the historical research.

GiN: Is it too early or have you gotten some initial impressions about Crusader Kings?

Lindgren: Crusader Kings has been celebrated by the press as combining a high level of detail with a less steep learning curve than our previous titles. On more specialized strategy sites, we have scored on average around 90-95%, while the more mainstream sites have given Crusader Kings a score between 75-85%.

GiN: Obviously we are all looking forward to the release of Crusader Kings. After that, are there any interesting projects or games from Paradox we should look out for?

In addition, the recent decision to license the Avalon Hill titles Diplomacy and Squad Leader has given us opportunities that reach even further than our previous titles. At present we do not wish to say much more on this or comment on other titles, but trust that more news is coming up soon!