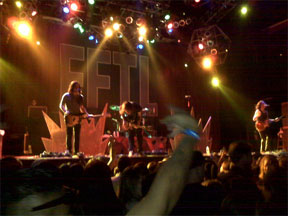 The band From First To Last is a group we are sure you will be hearing a lot more about soon as they continue to rocket skyward in popularity. However, when they were just starting out they had a choice to make. They could either sign with a normal record company, or with a company that wanted to put their music into computer games.

They chose to sign with Artwerk/E.A. Music to have their songs put into appropriate games that matched their style. The first title to feature their music, Facebreaker, will be in stores in a few months.

Now the band is mostly going the traditional route, playing gigs across the country, though a tour to support Facebreaker is also in the works and the group plans to keep their hands in the music for computer games industry.

We sat down with drummer Derek Bloom to give a listen to his story about how the worlds of music in games is coming together with traditional outlets.

GiN: So is From First To Last a relatively new band? How did you get your start?

Bloom: We started off in Florida and we were all playing in different bands at the time. We were all kind of wanting to do something different than what we were doing individually so we started playing together and everything kind of fell in place after that. That is the
Cliffs Notes version at least.

GiN: Who makes up the band?

Bloom: Right now the line up is Matt Good on vocals and guitar, Travis Richter on guitar, Matt Manning on bass, Derek Bloom (me) on drums, and Chris Lent on keyboards.

GiN: How would you describe the type of music you play? Your style?

Bloom: Well we change a lot because we all get bored pretty easily. I think every album we have done has had its own niche, but at the moment I think we would be best defined simply as alternative rock.

GiN: From what I have read, your band has been pretty popular, so much so that you had several contract offers of the traditional variety. However, you decided instead to sign with E.A/Artwerk, which will put your music into games. That certainly is a unique way to go. Why did you decide to go with the E.A./Artwerk deal over a traditional label?

Bloom: We are all game-aholics, and this was a sure fire way to get cheap or free game-ahol. Also, you know, there was the side of us that thought objectively about where the music industry is, and compared that to where the gaming industry is. It's a great opportunity for us to be able to introduce people who would never hear about us to our music.

GiN: I assume that the band members must be pretty plugged into the world of gaming to even consider something like this. Are you gamers?

Bloom: Yes, avid gamers. At least about half of us are. The other half dabble but have yet to really admit their addiction.

GiN: What are some of your favorite games of all time?

Bloom: I am personally a sucker for a lot of the live arcade games like Geometry Wars, Boom Boom Rocket and Smash TV to name a few. For the 360 I'd say my favorites are Bioshock, the Orange Box with Portal in particular, and Lost Planet. Other guys in the band would list Skate as their favorite hands down.

GiN: How important do you think the music is to a player's overall enjoyment of a game?

Bloom: I think it depends. If it is a very cinematic game, the music is crucial. In games like Skate, or Madden, I think the music is a fun addition, but not the same.

I always had fun picking through the playlists in games and finding the one song I could never get out of my head.

Hopefully for some people, that will be one of our songs.

GiN: So the first game your music is being put into is called Facebreaker? What is the game about?

Bloom: From what I understand it's a boxing game, and a sick one at that. I'm not sure if it is a new addition to the Fight Night series, or a completely different thing all together, but from what I have seen, I can't wait to play it!

GiN: How do you think your music will enhance the game?

Bloom: I think it will serve the same purpose most music in these kinds of games does, which is to hopefully give the player an enjoyable musical experience on top of the great work the game designers have done. I always thought it would be funny to see a boxer or wrestler walking to the ring with one of our songs blasting. This kind of brings that to life.

GiN: From a totally geek point of view, how psyched are you going to be when the game comes out and you are able to play it while your own music pumps in the background?

Bloom: You know to be honest, I'm really excited about the fact that we got our faces in the game and people will be able to fight as us. I know for a fact that as soon as we get this game we will all be fighting each other's characters in the back lounge of the bus for days.

GiN: Are you going to tour at all to support the game?

Bloom: Yes actually. We are doing the whole warped tour this summer with a Facebreaker wrap on our bus, and I believe that a person or two from EA will be riding with us as well. It should be awesome.

GiN: From a business point of view, did you think the deal with E.A./Artwerk would lead you to a traditional label or did you think you might make your career doing music for games? Could a band even go that way? I mean is there enough work out there to do something like that?

Bloom: Well, we are on a label now, but I know that all of us would love to really be able to score a game at some point, or be able to contribute music that we wrote specifically
for a game. It would not necessarily be a standard three minute song with a verse and
a chorus, or even one with vocals for that matter, but maybe something instrumental or who knows really.

I think you could probably make a decent living just putting songs in games. I mean its great promotion, but I know all of us are looking to really be able to stretch our legs, and do some different stuff.

GiN: Can fans buy or listen to your songs now? Let us know where to catch you guys.

Bloom: Our new album which is self titled just came out on May 6th via suretone/interscope and is available anywhere you can buy music. We also have a MySpace Page where you can go and stream some songs and if you like what you hear you can see where we are on tour at the moment and maybe even come out and say hello if we are in your area!