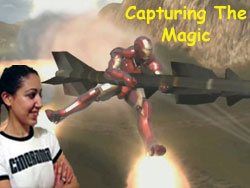 Does Every Movie Have To Have A Game Too?

Can we stop making games of movies please? They're never any good. And generally people are idiots, so if you make it they will buy it.

The "Ugg boot" is a case in point. If, two years ago, you'd told all females between the ages of 17 and 32 that they would be wearing a sheepskin slipper akin to that worn by your grandmother on a chilly November day, they'd have laughed at you behind an acrylic manicured hand. However, today women and girls are flumping around the place in granny slipper boots and all in the name of fashion. If you make it they will buy it.

Developers and publishers have a duty to consumers not to feed them absolute shite. I know it doesn't make financial sense, but can they really hold their heads up high having churned out the worst game ever, wrapped in a pretty super hero garb. Iron Man, Spider-man and every super hero in-between has had a movie. And wherever a movie goes, a game is sure to follow. Just not normally a good one.

Super heroes aren't the only ones with complete-pile-of-poo-on-a-disc games to their name. Harry Potter (okay, so child super hero in the making) has given us a fair few stinkers in his time. Considering the movies are great and the books offer enough source material to sink the Titanic, you'd think we could squeeze a decent game out of it. But experience suggests otherwise.

Now I know there are exceptions to the rule – Blade Runner (awesome game), Goldeneye er"and wait, there must be more. But for every Goldeneye (which came out after the movie and basically just borrowed the name) I can raise you a Crouching Tiger Hidden Dragon and blow you out of the water with Enter The Matrix. There are just too many howlers to mention, but the flipside of the equation cannot say the same. And no Chronicles of Riddick: Escape from Butcher Bay doesn't count – it was great, but thankfully wasn't an extension of the terrible follow up to the also great Pitch Black movie.

As with all things dear play chums it all comes to money. Games of movies are more than just games, or less than just games, depending on your perspective. A movie license game is just a glorified bed spread or t-shirt. It's simply there as a means of marketing the movie and making even more dollars for the parties concerned.

These games aren't lovingly nurtured by teams who really care about the finished product — at least I hope they're not. Maybe sometimes they are, but there are constraints in terms of how far the game can stray from the movie and maybe relations are strained. Then of course there's the small matter of the game having to ship to coincide with the release of the movie. Or not if you're Superman Returns.

I mean why bust your butt coming up with something original only to have to throw it all out of the window to make it into shops for the premiere? This is why we get a slew of lame platformers or the same old linear adventure game, which offers no surprises if you've seen the movie.

Frankly, I'd usually rather poke my eye out with a stick than have to endure the mindless pap that is the "game of a movie." If any care or thought does go into the creation of these games, it is surely lost somewhere down the line. By the time the unsuspecting public splashes out on these travesties, they are usually bland, ponderous and frustrating experiences at best. At worst they leave you rueing the day they created wireless controllers, preventing you from ending your sorry existence there and then in a simple living room hanging.

It's time for the game of a movie to stop. A futile thought, I know. As long as there's more money to be made, money that hopefully would not have been put aside to make more carefully crafted games, movie tie-in games will continue to be created.

And of course if they make it, they will buy it.