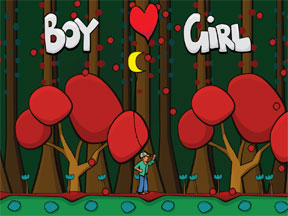 Our business interview turns to love in honor of Valentines Day. Dr. Danny Pearce, director of Grubby Hands, is betting that a game based on relationships can break through the huge amount of chaos and competition surrounding any new release on the iOS. Will Grubby Hands find true love in the App store, or will they be broken hearted?

Pearce: I wanted to make a game that captures a piece of reality. ‘Boy Loves Girl’ is based around the common problem of trying to please somebody else. The main character, Boy, is desperately trying to please the girl of his dreams by giving her what every girl wants…the moon on a piece of string. It’s obviously an exaggeration of a dilemma many men have, as the Boy ends up running around the world finding her favorite animals and capturing the stars in the sky.

Pearce: It starts off very calm and relaxing, to introduce the player to the mechanics. It gets increasingly more challenging to the point that the player needs to be very skilled to finish the later levels.

Pearce: The industry is such an exciting place that lots of people want to put their games out there, which can make it a challenge to get your game noticed.

Pearce: I think there’s a genre waiting to be discovered that makes use of existing technology: taking advantage of the processing power in today’s devices; making use of the number of users playing games in bite-sized goes; and making use of the fact that these devices are always connected to the internet. There’s something there…I’m yet to find it!