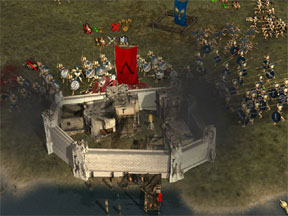 But This Time, Players Win

If the truth be told, I was not expecting much from Hegemony Gold: Wars of Ancient Greece. Here we have an independent studio trying to tackle the wars between Athens and Sparta, and all of ancient Greece, in a real-time strategy interface. This era is fairly well-trod ground in the game industry, with a lot of well-healed publisher-funded studios making everything from straight combat titles to economic simulators to political adventures. But let me tell you this: Longbow Games not only did an impressive job, but they broke new ground in the hyper-saturated RTS genre.

The best thing about Hegemony Gold is the interface, which is both simple to use, and complex enough for a full strategy experience. How it works is that the game practically exists on two different levels, the strategic overview and the 3D battlefield. But there is a seamless transition between the two.

When you zoom all the way out, Hegemony Gold looks like a board game. Armies and units are represented by stacks sitting on top of tokens that show their relative power and size. In a lot of ways it reminded me of the Axis and Allies board game. It’s very intuitive and gives you a lot of information very quickly. Then when you drill down and pass through the clouds, the world comes alive with a 3D interface, letting you command your armies, set their formation, and send them out into the world.

The music and sound is also impressive, and is highly dependent on the level of zoom you are looking at. All the way in, you are treated to a nice score of battle music when armies clash, but up on the top level you can barely hear your armies marching around the map. The audio transitions are as impressive as the visual ones in that they are seamless, which lends a real professional air to the game.

One of the biggest things you have to manage on the map, other than your armies, is your supply lines. This is above and beyond what almost any other wargame does, and really breaks new ground. This is a unique key to victory that is often overlooked in most RTS titles. How it works here is that as you gain new cities, you need to connect them to farms and other cities so that you form a supply web to keep everyone fed. Your armies will remain fed so long as they sit within one of your supply web’s ranges. However, when they march outside, they have to carry food with them. If that food runs out, they go hungry and won’t fight very well, or at all if attacked.

To compensate for this, you can do a couple things. First, you can march into an enemy supply web or even an individual farm and eat their food, proving that there is such a thing as a free lunch, if you are willing to fight for it. You can also have slaves deliver your army food, though this is not a good permanent solution.

Now, when you get really tricky, you figure out that when you cutoff your enemy’s supply lines, you can weaken their armies. There are even growing and harvesting seasons. So if you move in and occupy their farmland during the harvest, it means that there will be much less food overall for your opponents, while your troops live high on the hog. That means that in the pending battles, you will have a huge advantage. In fact, knowing this, your enemy is probably going to have to attack you straight away, and you can use that knowledge to setup the battle exactly how you like, which is another key to victory – fighting on your own terms.

The actual fights look good. I’ve seen better fighting animation, though Hegemony Gold is quite passable. The truly awesome thing though, is the control. It’s so easy to change your formations. You just click to tell your troops how to line up and they follow your orders. Then you can tweak them a bit to make sure that no holes form in your line. The key is to fight like the successful Greeks did, using your cavalry, phalanxes and light infantry to their fullest. You need to anchor your enemy in place and then tear them up with devastating flanking attacks. Setting up a battle on your terms however, is the real skill, because they are going to be trying to lure you into the same type of trap, and the AI is pretty darn good depending on who you’re fighting.

The Hegemony Gold game comes with three full campaigns, each of which does a good job of telling a story, which is impressive for an RTS. There is the Philip of Macedon campaign which follows the rise of that great general. And there is the Archimedean War; which is focused on Athens at the start of the Peloponnesian War. And finally, you get to play the Ionian War campaign where you are those bloodthirsty Spartans going after the Athenians.

Props has to go to Longbow games for creating a AAA title on what is probably less than a AAA budget. I honestly didn’t think that was possible anymore.

Hegemony Gold is available for sale directly on their Website (they are self-published) and I hear that they are working on Hegemony Rome, which will add fortresses, bridges and all kinds of Roman engineering into the game. That will be a sight to see. In the meantime, Ancient Greece beckons, and any armchair general worth their salt should hear the call.

Hegemony Gold earns 4.5 GiN Gems. This independent title can compete with any RTS on the market today. And if I were a betting man, I would say it would be Hegemony that would win your heart.