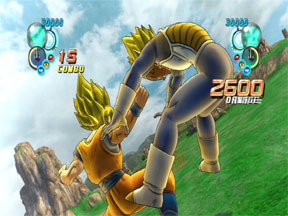 DBZ holds a special place in the nostalgia center of my heart, so of course I’m excited when I hear of any form of new DBZ media. This goes double for games due to my love of gaming and the ability to enjoy the game with friends. So why can’t DBZ get back to the more technical gameplay that was found in the Budokai series?

Dragon Ball Z Ultimate Tenkaichi (DBZUT) uses the same basic battle system found in the other Tenkaichi games. One major difference though is how watered down the fighting part of the game has become. In other DBZ fighting games there was a lot of high speed action available by different button combos, I’m not going to say it was absurdly deep or anything but it was there. Unfortunately DBZUT has dropped the idea of complex combat for the simpler "smash this one button over and over again to win" formula of gameplay.

It disappoints me to see fighting games with toned down gameplay but I can see one bright side to it, a child could easily operate this game and beat it without a problem. This means that DBZUT would be a great title for a child, but then again I wonder if a parent would buy it for them or not with its Teen rating, hmmmm…

One of the reasons that I was excited for DBZUT was the new addition of character creation. As stated I’m a huge DBZ fan so of course I’d love to create a character after my own image and tear it up in the world of DBZ, but there’s a problem with this. The character creation system is so incredibly limited that no matter what kind of clothes, hairstyles, or other features a character has, they still look like nothing more than Akira Toriyama’s rejected character designs.

If there is one thing about DBZUT that’s praise worthy it’s the graphics. DBZUT captures the feel of the anime and perfectly renders it into three dimensions. All of the characters look amazing and the destructible environments are a must have for any DBZ game.

In the same vein as the graphics, there’s the audio. With all of the characters being accurately voiced by their anime counterpart, there isn’t any reason to worry about the quality of voice acting in the game. The only issue I have with the voice acting it that some characters have been replaced with their newer Dragon Ball Z Kai voice actors. It isn’t so much that the new voice actors are bad, but it does catch me off guard when a character has a different voice than what I remember. Still this isn’t something I can hold against the game as all new DBZ games are using the Kai voice actors. It’s just something I felt was worth mentioning.

DBZUT has amazing graphics and audio but is hindered by its more than shallow gameplay. While it has the potential to be a great way to introduce a younger audience into the world of DBZ and video gaming all in one, the Teen rating will hinder its ability to do this.

Dragon Ball Z Ultimate Tenkaichi battles its way to 2.5 GiN Gems out of 5!