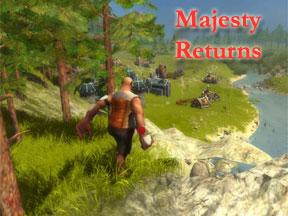 Majesty 2 Begins Where Original Left Off

Nine years ago, a new kind of RTS hit the market in the form of Majesty: The Fantasy Kingdom Sim. And it was so completely different from anything else out there in the RTS genre that it instantly attracted a loyal fan base that loved all things Majesty.

The big difference in the game was that while you could influence your heroes, you didn’t directly control them. So you could put a bounty on a monster that was ravaging your kingdom, but it was up to the heroes to figure out if the reward was worth the risk. They advanced in level and sometimes even helped each other out, but you were never really in direct control. This sometimes frustrating position made the game unique and difficult to master, but extremely addicting as you tried to convince your heroes to follow your intricate plans to the letter, which they almost never did.

When the original developer shut it doors, everyone thought that Majesty was dead. However, one fan, Fredrik Wester just happened to be the Executive Vice President of Paradox Interactive. And he went on a quest of his own, to save Majesty. Obtaining the rights, he found a great development team and set out to make the title of his dreams – and Majesty 2 was born.

We talked with his majesty Wester about saving the beloved franchise, and found out exactly what fans can expect from Majesty 2.

GiN: When the original game came out, what about it caught your attention?

Wester: The originality of the gameplay where they completely stepped away from the click-fest that is so common in traditional RTS games really drew me to it, as it did with a lot of players. Majesty was a breath of fresh air in the RTS arena and still today it is a revolutionary concept compared to other games in the RTS genre.

GiN: Were you surprised that no sequels were ever made and do you know why this was the case?

Wester: I was very surprised to see that no publisher was interested in making a sequel and have no idea why this was the case. Sometimes publishers look more ahead instead of looking what games you can remake and approve upon.

GiN: How did you come up with the idea to get the rights to the game?

Wester: I was a great fan of the first game. When Cyberlore, the original developer, closed their gaming branch I got in contact with them. We then worked out a deal for the title, and the rest is, as they say, history.

GiN: What developer was tapped to make the sequel, and why were they chosen? I guess nobody at Cyberlore was around to do it anymore?

Wester: Cyberlore had already closed their games business, so we had to look for a new developer. We looked at three different developers before choosing to work with InoCo. After playing InoCo:s "Fantasy Wars" and talking to the Producer Alexey Kozyrev, I was convinced they were the right team to produce the sequel.

GiN: If people played the original Majesty, will they recognize the new version?

Wester: Yes they will recognize a lot of the elements in Majesty 2 as well, and they will also learn to appreciate tons of improvements and changes made to the original gameplay. One thing that is removed is the micromanagement (like having to click "market day" on the marketplace every 30 seconds) giving you more time to follow your heroes around.

We have worked to make Majesty 2 with an original and fun graphic style and we are currently doing the sound and voice-over for the game. This game is made both for fans of the original game and for people who didn’t discover Majesty when it was first released.

GiN: How important was it to keep the old flavor of the game?

Wester: Very important. Still today, Majesty: The Fantasy Kingdom Sim is a great game and it still sells in markets where we have decided to re-release it. Our German distributor was totally against a re-release when we first brought it up, but they were really surprised at how well the game has done for them.

After all it has been nine years since it was originally released. The flavor of the game remains the same, but the graphic style is somewhat new, we have found a style of music that we like and a storyline that connects the two games, making Majesty 2 a real sequel to the first game.

GiN: We assume you did add some new features beyond the new visual pop that systems are capable of making now. What will we find new and better about Majesty 2?

Wester: I mentioned removing some of the micromanagement, since this gives you more time to spend with your heroes. If I can only choose one more thing it will be how personal the heroes feel in the game; you will see if they have purchased new armor and weapons and the stats page is almost as advanced as a modern RPG. I have played Majesty 2 in Alpha and have been sucked in for two or three hours, which is always a good sign.

GiN: One of the few criticisms of the original game, and there were few, was that the final few levels were close to impossible because the monsters that you were fighting were very powerful and bent on destroying you, yet you started anew with weak heroes and no real chance to level them up before the big attacks started, so it was a bit unbalanced. Most heroes simply refused to fight for you because they knew they were doomed. Did you look at game balance issues and try to level things out a bit with Majesty 2?

Wester: Balancing is one of the key issues and also one of the trickiest parts of RTS games in general and Majesty in particular. Since your heroes have a will of its own, it is always tough to impose your strategy upon those little obnoxious creatures.

Balancing is the hardest part in the game, but also one of the things we are working most to achieve.

GiN: When can we expect the new game to ship?

Wester: In Q2, I would say late May or Early June, but we need to see first if the game is ready for release by then. Our initial target date was Q1, but we have decided to give it a few extra months for polishing and finish.