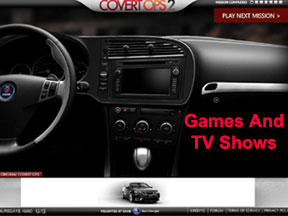 So you have just finished watching one of your favorite shows on television and you suddenly realize to your horror: that you have to wait an entire week before you can experience a new episode. Now the USA Network comes to your rescue with a series of high quality games to support their shows. These games feature the real actors from the shows, and are created to have the same flavor as the show you love. So you not only extend your viewing pleasure, but can actually interact within the world you love.

Beyond just building up loyalty among its fans, these games offer unique sponsorship opportunities for companies looking to engage people in ways other than traditional advertising.

One of the most popular shows on the USA Network is the spy thriller Burn Notice, so it makes sense that there is not one, but two games that support that show. We snuck up to Jesse Redniss, vice president of USA Network Digital, to get the scoop on how his network is using games to promote TV shows, and how they are ending up with great success in both areas.

GiN: For those who aren't familiar with the show, can you tell us a little bit about Burn Notice; the plot of the show and the main characters in it?

Redniss: BURN NOTICE is a sexy action-packed series starring Jeffrey Donovan ("Changeling") as Michael Westen, a blacklisted spy who finds himself stranded in sun-soaked Miami without money, resources, or a clue as to who burned him, or why. The only tools at his disposal are his wits, his charm, his special ops training and his "friends:" Fiona (Gabrielle Anwar- "The Tudors"), a beautiful ex-IRA operative who also happens to be Michael's ex-girlfriend, and Sam (Bruce Campbell – "Evil Dead"), a washed-up military intelligence contact who works as Michael's sidekick, and his mother (Emmy Award-winner Sharon Gless – "Queer as Folk"), who Michael has spent most of his adult life trying to avoid.

GiN: What about the Burn Notice show did you think made it a good topic to extend into an interactive game format?

Redniss: The show's action-packed narrative, provided us a wealth of exciting adrenaline- pumping activities that all pointed to the basis for a highly-enjoyable and engaging skill game. Additionally, the increased interest from fans made us want to provide them something more; a way to interact with the show and its characters.

GiN: In fact, Covert Ops 2.0 is the second such game based on the show that the USA Network created. So we can assume that the first go around was a success?

Redniss: Yes. The first game ran in conjunction with the show for a period of nine weeks. In that time, the game garnered more than 8 million page views, 300,000 visitors over the campaign, 60,000 registered users and the average time per engagement of 12 minutes. Additionally, one lucky player won a Saab 9-3 from our sponsor, GM. GM's ROI also exceeded anything the company has ever experienced with online advertising.

GiN: Do you think that an interactive game based on a TV show brings new fans into your viewing family, or is the main goal to give existing fans a treat and build loyalty?

Redniss: Our first goal is always to provide our loyal fans new opportunities to engage with the brands they love beyond the TV. However, there's no doubt that by building our franchises beyond our cornerstone format, we're introducing new people to the USA Network brand and community.

As an example, about three years ago we developed our first casual game based off of one of our popular shows – MONK. MONK'S MIND GAME was casual in nature, with a WarioWare game play. The game has been played by over 2 million people worldwide and has been linked to by more than 2,000 sites.

GiN: Were the cast and creators of Burn Notice involved in the making of the game? Was making the game have the same "feel" as the show an important consideration?

Redniss: Absolutely. We wanted the game to be a completely seamless extension of the series. The show's team, including Matt Nix, Mike Horowitz and the writing team were heavily involved to ensure that the COVERT OPS storyline stayed true to the BURN NOTICE mythology and ran in parallel with this season's story arc. Each new mission was accessible following the weekly airing of the program – Thursday night's 10/9c on USA.

GiN: What is the original Covert Ops game like?

Redniss: COVERT OPS 1.0 was also a first-person experience, but had more of a point-and-click flash-based experience, as COVERT OPS 2.0 is largely driven by videos and intense action.

GiN: Okay, so what is new exactly about Covert Ops 2? Did you add onto your existing concept?

Redniss: We definitely built on to our existing concept from COVERT OPS 1.0. However, we tried to make the new game more challenging, provide a new game-playing environment and got new characters from the series involved, specifically a reoccurring character named Seymour (played by Silas Weir Mitchell).

GiN: There was also a financial angle to your first game, which seemed to heavily promote Saab. Do you think that in these difficult economic times, which advertisers are looking for something new like being featured in a game over traditional commercial advertising?

Redniss: What we have found is that both advertisers and fans are looking for a new way to interact and connect. We feel strongly that USA Network has helped drive a trend in online advertising with the introduction of COVERT OPS 1.0, and now 2.0, which will carry on through 2009 and beyond. Non-intrusive, seamless advertising integrations are the way consumers want to be engaged – no one wants to be forced to respond to a brand. USA prides itself on providing exceptional branded integrations, and COVERT OPS is a shining example of that.

GiN: Obviously making a television show is different from developing a video game. Did you bring in game design experts to help craft Covert Ops 2?

Redniss: We worked with Omelet, a creative shop in Los Angeles that's well-versed in developing online alternate reality experiences. They were instrumental in our delivering the best possible game play experience and brand integration.

GiN: Based on your success with Covert Ops, do you think that other shows on the USA Network would be good candidates to have their own interactive games?

Redniss: Absolutely, in fact, we started this model a few years ago with several shows that have various forms of online games and USA Network is one of the only cable networks to have its own casual gaming portal: characterarcade.com. Character Arcade boasts more than 40 casual games.

GiN: For those who want to check out Burn Notice, when is it on?

GiN: And for those who want to play Covert Ops 2, when will the game be ready and where can people go to play?

Redniss: The game launched Thursday, Jan. 22, in conjunction with the BURN NOTICE new season and will end on March 5. The game can be accessed at www.burnnoticeops.com. You can also find a link to play the original COVERT OPS 1.0