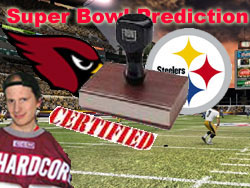 I never thought that the prediction I made regarding Super Bowl XLIII would actually come true. I mean, look at my predictions before going to the current generation consoles. They were always the wrong team or the margin of victory was larger than I said it was going to be.

However, my assumptions of a 28-25 Steelers victory via Hail Mary pass couldn't have been any more accurate. Even a critical interception thrown by Kurt Warner made by Bryant McFadden in the 3rd quarter led to a touchdown on the ensuing drive, almost mimicking the 100 yard interception return by James Harrison, which led to a first half ending touchdown during the real Super Bowl.

I really started to take notice at the beginning of the 4th quarter that it was starting to hit a little bit closer to home. Remember in my prediction how the Steelers carried a 22-10 lead, only to see the Cardinals comeback afterwards via two touchdowns, as well as a successful two point conversion? While there might not have been a two point conversion attempt in Super Bowl XLIII, the Cardinals' 4th quarter rally seemed like it would have came right from my Xbox 360.

Being down 20-7, it all started with Kurt Warner completing a one yard pass to Larry Fitzgerald, cutting the Steelers lead down to 6, but I just brushed it off as coincidence. However, after the Cardinals score a safety as a result of Justin Hartwig's holding penalty in the end zone shortened the lead to only four, that's when I shown concern.
And then it happened"

It was a 64 yard pass, again to Larry Fitzgerald, resulting in a touchdown that gave the Cardinals a 23-20 lead that took the prediction from just coincidence to being just plain surreal. At the bar I was watching the Super Bowl, I just looked up at the screen in complete shock, and was catatonic for nearly five minutes just trying to figure out what the heck was going on. I couldn't believe this would happen, and said there would be no way my prediction would be so accurate as to the Steelers coming back in the end to win their 6th Super Bowl ring.

But of course, I should have learned at that time to keep my mouth shut because we all know the result, a 78-yard drive culminating with a touchdown pass to eventual Super Bowl XLIII MVP Santonio Holmes, would give the Steelers a 27-23 victory.

The accuracy of my Super Bowl XLIII prediction via Madden 09 was uncanny in its own way, however there is one thing I need to mention about it. I only told a select few about this, and now that the Super Bowl has come and gone, it's time I came out and said the truth about the Hail Mary pass thrown to Nate Washington that resulted in a touchdown"

The final play in my prediction game was an incomplete pass. Washington never caught the ball, and the Arizona Cardinals won that game 25-22. My original intent was to add a little excitement and controversy to my prediction, and much to my surprise, the false score and game analysis I provided would end up almost identical to the true turnout.

I am not apologizing for what I did, but I wanted to come clean. Does this make me the Jimmy the Greek of Madden? No. I couldn't' even make a good Frank Caliendo in terms of predictions. I just did the Hardcore Bowl originally as a fun idea to predict how the Super Bowl would turn out. I just never expected it, and the real game, would end up being nearly identical.

I'm wondering, is it too early to start making predictions for Super Bowl XLIV yet?

Currently Playing: Nothing (haven't had time)

Waiting For: Street Fighter IV (360, if it comes out the day it's supposed to! None of this "shipping date" B.S. either!)