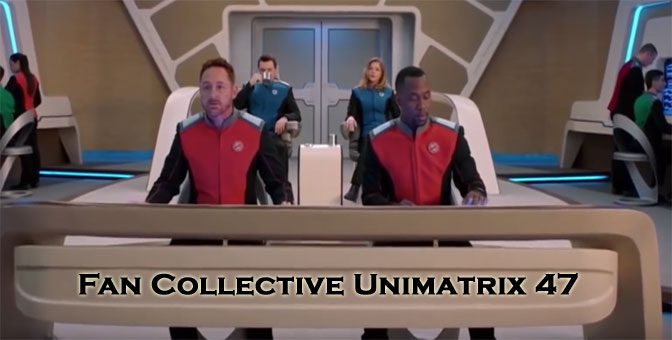 So, yes, I realize that this week is another new Lower Decks episode, but due to real life business, I’m fairly certain I’m not going to manage to watch it in time. Ergo, have another Orville write up! I feel a little bad about it considering that it’s actually Star Trek Day…

Following on the heels of the previous episode “A Tale of Two Topas,” the sixth episode of the third season called “Twice in a Lifetime” picks up on a first season episode and builds upon it to create something new. Only, whereas “Two Topas” corrects a problem, “Twice in a Lifetime” pulls out your heart and stomps on it. However, it does give us a fantastic look at what Gordon Malloy, one of the most underused characters in the series, could be given the opportunity. Unfortunately, we also get to watch as all that character growth gets wrenched away from him. “Twice in a Lifetime” is about choices and what happens when there simply are no good options. “Twice in a Lifetime” could have been one of those amazing episodes that stick with you, long after the credits have rolled, but a brief attempt to hand-wave the blame undercuts the story, leaving the episode feeling a touch mediocre rather than great.

If you don’t remember the Aronov device, you can certainly be forgiven, but the device represents the in-universe method by which the Orville can manage time travel. LaMarr has discovered how to enhance the device, and both Mercer and Kelly agree that the device could pose a real threat were it to fall into Kaylon hands. They thus contact the Union and arrange to meet a convoy of Union ships that will transport the device to a maximum security research facility. The ship rendezvouses with the convoy, but Admiral Ozawa mentions that the facility has failed to answer any of their hails.

Just as the conversation concludes, a contingent of Kaylon drop out of quantum and begin attacking the Union ships. A sphere locks onto the Orville with a tractor beam, and Mercer orders the device destroyed. Malloy runs down to do just that, but rather than succeeding, he ends up transporting himself back to 2015. After escaping the Kaylons by jumping to Quantum, the Orville crew learns that Malloy went back in time and lived an entire life, thereby violating Union temporal protocols. Mercer orders the ship to jump back in time, even though the jump will deplete the quantum drive critically.

After the jump, LaMarr discovers that they didn’t quite jump back far enough, landing in 2025 rather than 2015. Because they have to retrieve Malloy regardless as well as acquire more dysonium to power the quantum drive, Mercer sends down two Away Teams. He sends Isaac and Charly to retrieve the fuel source and goes with Grayson to retrieve Malloy.

Charly and Isaac successfully pinpoint the location of the dysonium deposit, though they have to win a motorcycle via an arm wrestling contest and pretend to be a loving couple in order to accomplish their task. Charly remains deeply unfriendly toward Isaac who just seems confused by her hostility. Eventually, he pushes Charly to reveal that she lost someone she loved, her friend Amanda, in the conflict with the Kaylons before knowing if Amanda felt the same way. Amanda threw Charly into an escape pod and manually activated it, meaning that she perished when the ship Charly escaped exploded. Charly has been grieving ever since.

Mercer and Grayson have less luck as they discover Malloy working as a pilot. They approach him in the hanger, and he invites them back to his place where he introduces them to his wife Laura (back from the season two episode “Lasting Impressions“) who is visibly pregnant and their young son Edward. Mercer and Grayson argue that Malloy violated Union law, and Malloy tells them that he survived being marooned in the past. Moreover, he made a life for himself, one that he loves, and he refuses to return to the Orville. Mercer and Grayson depart but return with Talla Kiyali to bring Malloy back, but he remains staunch in his refusal.

Mercer and the Away Team leave him, but they do tell him that they’re going back to 2015 to prevent Malloy from making changes to the timeline. Gordon reenters his home and embraces his wife and son, telling them that their family is stronger than time, which is something no one can take away from them.

The Orville doesn’t quite make it to the exact moment of Malloy’s arrival in 2015, but they hit soon enough that Malloy is still abiding by the temporal protocols and hiding himself in the woods. They bring him back aboard without objection, but they must next confront the fact that their Aronov device will require several months of repair. However, LaMarr explains that they can fly the Orville close to the speed of light without the protection of the quantum field, taking advantage of time dilation to make it home.

Later, Mercer and Grayson tell Malloy about his life, and Malloy expresses dismay that he eventually altered the timeline and forced Mercer to make a difficult decision. Mercer and Grayson attempt to offer comfort, and Grayson eventually comments that it’s been a long time since the three of them sat together. They collectively decide to try and enjoy a fourth bottle.

Giving Malloy an episode in which he’s more than comic relief has been long overdue, and “Twice in a Lifetime” gives Scott Grimes plenty of opportunity to show us a different, more complex side of Gordon Malloy, who up until this moment has largely been relegated to Mercer’s Dudebro status. Here, we get to see a Malloy who has been confronted with a terrible situation. He was marooned in the past with no guarantee that his crew would be able to retrieve him, and as the years passed, he had to come to grips with a reality in which he’d been marooned. However, this Malloy demonstrates a level of resilience we’ve never seen from him before by creating a life for himself out of whole cloth.

It’s therefore easy to understand his refusal to return to his own time. He’s experienced a happiness with Laura that he never gets the chance to pursue aboard the Orville, and the years he lives in the 21st century have matured him as a character immensely. Where he’d been a sidekick, he steps away from Mercer’s shadow and tells his captain and friend that no, he has no intention of returning to his own time because the life he has is the one he wants. It’s a fantastic moment, and it’s perhaps the first time that Grimes has gotten to flex his acting chops.

The episode clearly wants to set this situation up as a version of the Edith Keeler story from TOS’ first season episode called “City on the Edge of Forever,” but the problem is that the story never sets up real consequences. It’s not like the Union ceases to exist when Malloy disappears as the Federation does in “City.” Unlike MacFarlane, who wrote this episode, Harlan Ellison’s TOS episode creates real, tangible effects that must be avoided. That’s why Kirk must make the choice he does, no matter what it costs him emotionally, but Mercer merely discusses potential ramifications in the abstract. As a result, Mercer’s decision to retrieve Malloy no matter the cost loses the weight of Kirk’s because it seems more like slavish devotion to Union rules than an act safeguarding the future.

The sequence between Malloy, Mercer, and Grayson then reduces whatever emotional impact might remain to near zero. Malloy loses all of the maturity and returns to Dudebro status and then apologizes to Mercer for his actions. Mercer and Grayson then try to comfort Malloy by telling him that he was under pressure no one else could understand, reinforcing that Malloy was at fault here. There is a brief moment of introspection by Mercer that he regrets that two children will never be born, but that gets summarily hand-waved away.

We go from the wrenching image of Malloy embracing his family to Malloy suffering from guilt at his own weakness. I don’t know that there’s an actor on the planet that could redeem that last moment, and that’s certainly true here.

The Charly/Isaac subplot is the very definition of underwhelming. While the show had yet to confirm the nature of Charly’s tragic backstory, we mostly already knew. Even when Charly frames Amanda’s death as the loss of a potential love affair, that additional detail seems thrown in as an afterthought, rather than adding to the weight of the moment. Anne Winters doesn’t manage to sell what is, ultimately, an uninteresting and cliché storyline.

I want to like this episode far more than I do, but fundamentally, I found it disappointing. That said, I think the image of Malloy’s family embracing themselves to wait for nonexistence is a really fantastic image as was Malloy disputing Mercer’s reasoning. I just wish the rest of the episode had lived up to that promise.

Three and a half quantum drives, but only for one scene