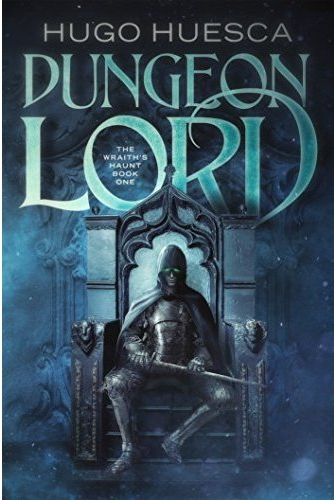 This week for Bookish Wednesday I’m back with another LitRPG. It’s Dungeon Lord, Book 01 in the Wraith’s Haunt series, by Hugo Huesca!

Plot Synopsis: Dark forces have extended Edward Wright an offer of incredible power at a terrible cost and Edward has chosen to make them regret it…

Plot: The plot of this book is okay, up until a certain point which crossed one of my bottom lines that I have in regards to stories I read which resulted in me immediately dropping the entire story, even if I hadn’t finished it. I’m going to break a rule of mine by stating what they did and as it’s a minor spoiler this is your only warning.

Still here? Great, so the author has a Point of View of a random villager kid. Normally I wouldn’t care about this except that later on the author kills said kid in the most horrific way possible and it’s highly disturbing. It’s so disturbing that I almost threw up, and I’ve read and listened to many, many books. I can’t stand seeing horrific deaths of kids, it’s an instant reason for me to hate with an utter and extreme intensity that almost never goes away towards the person performing it. Now you might be saying “Michael, it happens all the time in books!”. Well yes it does, however it’s off screen. I have no problem with this writing trick as it is just words on a page. You never really meet the characters, nor have them as the Point of View you see the story through. This author did that, and I had to immediately stop the book. I can’t stand authors who resort to this sort of trick, which is why I have such a dislike for authors like George R. R. Martin. However those are at least somewhat merciful deaths.

Mr. Huesca introduced this character solely to kill it off in a truly terrible manner.  So I didn’t finish this book. I’m also advising everyone to not read this.

That’s it for this Bookish Wednesday, sorry for such a short post, and abbreviated review. I was torn between writing this and potentially giving the author more readers or writing it and potentially warning others about the truly dark nature of this book. However I thought I might as well try to tell others to steer clear of this book, so this post was written.