Plot Synopsis: When Peter Smith’s classmate snaps a picture of him during a late night run at the track, Peter thinks he might be in trouble. When she posts that photo―along with the caption, “See the Pretty Boy Run,”―Peter knows he’s in trouble. But when hostiles drop through the ceiling of his 6th period Chem Class, Peter’s pretty sure his trouble just became a national emergency.

Because he’s not really Peter Smith. He’s Jake Morrow, former foster-kid turned CIA operative. After a massive screw-up on his first mission, he’s on a pity assignment, a dozen hit lists and now, social media, apparently. As #Prettyboy, of all freaking things. 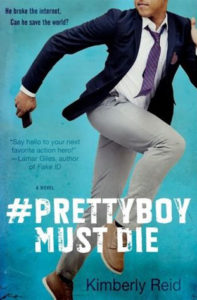 Plot: Reads a bit like a typical spy thriller but mixed with high school teen drama. While interesting, there were enough moments of teenage awkwardness to make reading tiresome.

Characters: Peter Smith (Alias)/ Jake Morrow (Real Name) is our main character and he gives off the average teen appearance, but is also a highly skilled operator. The rest of cast is entertaining as well, although there are enough teenager drama issues to make character interactions tedious sometimes.

Check out #PrettyBoy Must Die with a copy from Amazon!

Overall: For the most part it’s a highly enjoyable ride, but older readers will probably find the high school drama part grating.

For those who like: Spy Thrillers, High School Drama, Interesting Plot, Solid Cast of Characters.

Not for those who don’t like: Any of the above, particularly the drama portion.