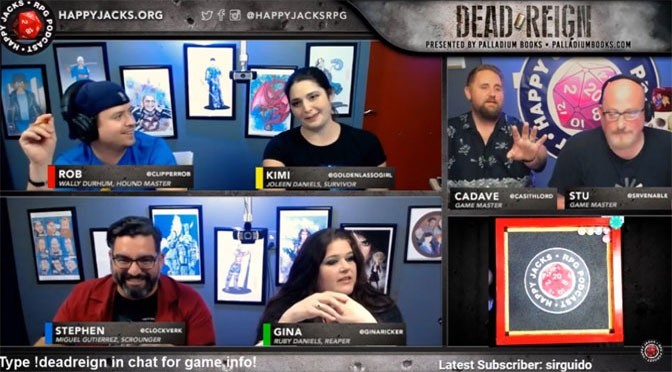 The seeds of the Happy Jacks RPG Network were planted in 2009 at the Southern California Renaissance Faire. The bands that played and performed in between shows, like the Poxy Boggars and The Merry Wives of Windsor would sit and talk about tabletop roleplaying games like Dungeons and Dragons, GURPS and Traveler. Since one of these performers already had a recording studio built for his music, these musicians began to record their “random RPG musings” and the Happy Jacks RPG podcast was born. 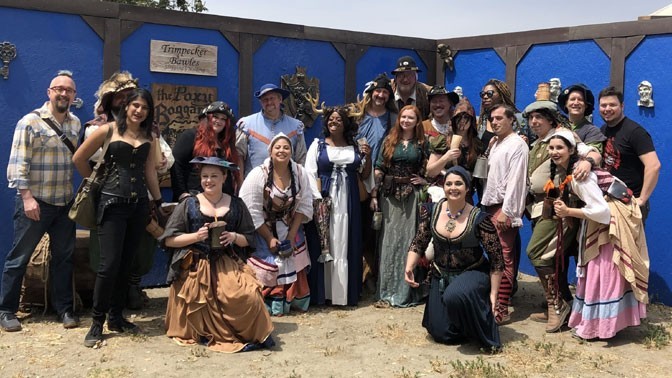 This studio belonged to Stu Venable, Jr. and it became the home of one of the longest running and varied RPG podcasts. It has a philosophy of being serious about not being too serious about their hobby which reflects their catch phrase of, “pursuing the RPG hobby with reckless abandon.”

This podcast has grown to a diverse cast of over thirty, with different members coming and going.

In our questions to Happy Jacks, they point to, “Stu, Stork and Kimi” being a core trio.

Being musicians, these podcasts have their own homegrown RPG themed music, from Stu’s and Kimi’s musical repertoire.

This one, Called Thousand Lives, is particularly nice.

And we really liked this one, called Plan B, for its obvious role-playing implications and theme, which happens to be about something that we have all experienced while playing.

Homegrown music is very important to this group, with the very name of the Podcast being the title to a song played on the Renaissance Faire stage.

When asked how they grew since then, Kimi wrote, “In the past 13 years what started as a weekly advice show that read emails from fans around the world, we eventually added actual plays and, years later, added video and streaming as well.” Living in the Los Angeles area, having a network of gaming conventions like Strategicon, theatre, music, cosplay and even a “nerdy gym that Kimi coached at for a while” made for a diverse cast with an amazingly diverse group of games.

This has not gone unnoticed.

“Over the past 13 years we’ve had dozens of people reach out and tell us how much having women or POC participating in giving advice or an actual play meant to them, so it’s become part of our philosophy.” Kimi wrote to GiN.  “We work hard with scheduling to make sure that all our actual plays have POC, non-men, and LGBTQIA representation.”

This interaction from their world-wide fan network has run the gamut from the old message board format to their present Discord channel. It grew from an advice show where the podcast would be downloaded onto an iPod to a simultaneous, YouTube, Twitch and multi-podcast platform. The Happy Jacks crew does this on their own time, while having growing families, outside jobs and other interests. If you look at their podcasts you can see the progression of their personal lives as they explore the fictional lives of their characters and invest in world creation and recording technology for the campaigns they create.

Happy Jacks have played more than twenty different TTRPG systems. When asked what systems they’ve played the most they say, “Powered by the Apocalypse games, D&D, Legend of the Five Rings, Savage Worlds, and Traveller.” They’ve also run Call of Cthulhu, Vampire the Masquerade, Vampire 5th Edition, Werewolf, Star Trek and their own homebrew creations. They are also known to try out new systems and follow the indie game scene in various one-shots.

The podcasts are not edited much and are very open ended, much like someone’s home game. Listening you to the various games you can pick out that these are friends who are taking their beloved hobby and opening up their play for an on-line audience. Most are not professional voice actors and do not make their living off their gaming. It is done out of passion for TTRPGs.

The now very well-known Aabria Iyengar was on Happy Jacks. She played in many different APs and participated in their advice show. But there is one guest they had back in 2010 that is extremely famous, the Critical Role Dungeon Master, Matt Mercer.

As Kimi tells it, “Well, there was the time we had this unknown named Matt Mercer on the show in 2010. He was GMing a home game for one of our hosts at the time and we thought it would be fun to have him on to talk about his acting gigs (as a voice actor on Thundercats). When we weren’t recording, he was talking about this wild idea he had to make a tv show about playing D&D someday. At the time it sounded very far-fetched. The episode is a bit outdated since we were talking about 4th Edition for a lot of it, but it’s still a lot of fun.”

Stu, oversaw much of this huge undertaking while also acting as GM for many of the games. He did this while writing pages of background material for his players. This ledto some burnout and he is now stepping down as the head of Happy Jacks and Kimi is stepping in to run this network. Stu will be starting another podcast called Netbusker.net where he explores folk music and history. He promises to still show up for some Happy Jacks episodes but stepping back from the nuts and bolts of putting out their content. 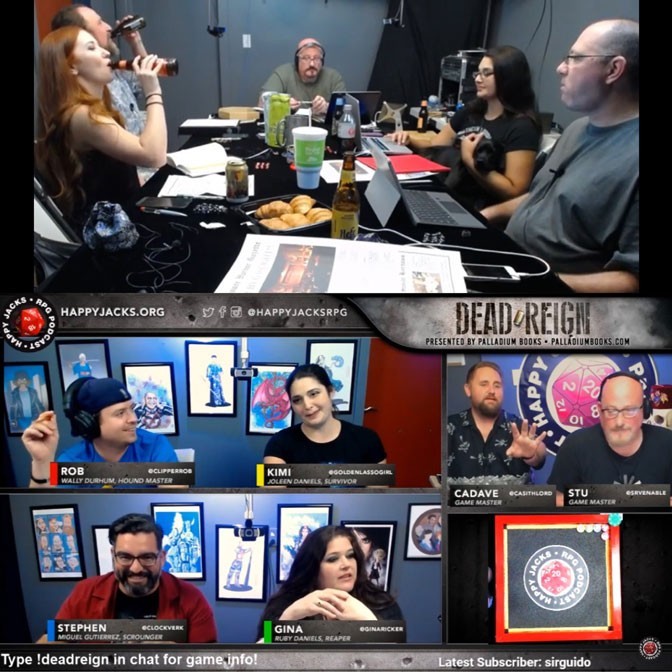 Happy Jacks RPG Network is the place you want to go to see a wide variety of games, from a group of players rather than professionals.

“We are a group of friends more than a “cast.” Our friendships simply reflect the diversity of where we live.” Kimi says. “When we aren’t recording, we are usually hanging out together either gaming or something else equally nerdy.”

One thought on “The Adventures of the Happy Jacks RPG Network”