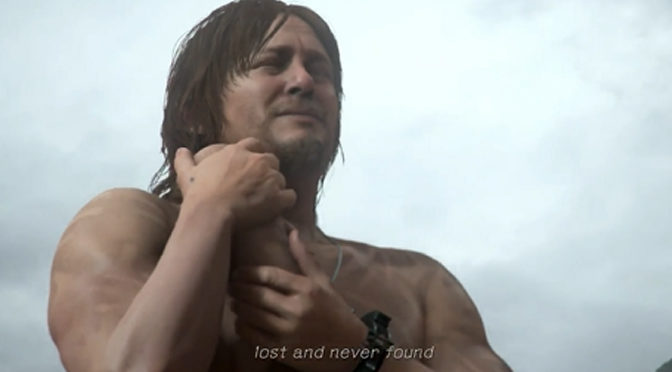 Hideo Kojima wins the E3 2016 award for most surreal game title, with Death Stranding. Nobody knows what it means, but his presence was a pleasant surprise at Sony’s press conference.

“I’m back,” Kojima said, in a thinly veiled reference to his bizarre departure from Konami. He beamed at the applauding crowd, before introducing the trailer to the first project from Kojima Productions.

The trailer doesn’t reveal much in the way of plot or gameplay, but it delivered plenty of atmosphere. Death Stranding sees Kojima join forces with Walking Dead, actor Norman Reedus, once again, after abandoned project Silent Hills.

In a departure from the techno babble of the Metal Gear series, this teaser suggests more of a skandi-noir feeling. We see a man (Reedus), crying on a beach, naked, clutching a baby, which he is handcuffed to. Yes, really. Then the baby disappears leaving only tar handprints – much creepiness. And then the man staggers to his feet and we pan round to see dead sea creatures washed up on the shore.

Make of that what you will and let us know your theories. Here’s the trailer: