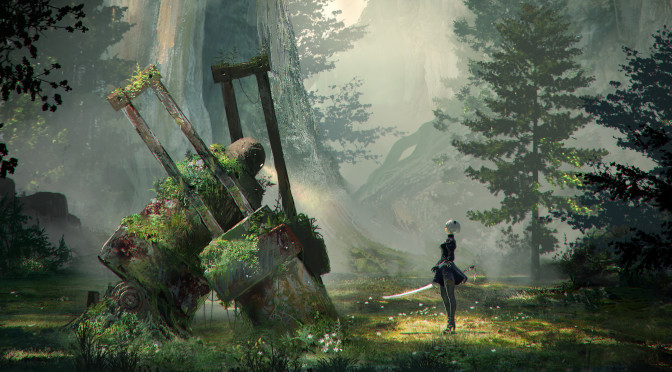 Square Enix revealed NieR (New Project), at its E3 press conference, yesterday. The game is a follow-up to action RPG, NieR, which has a cult following.

The ‘trailer’ consists of stills of the concept art, with a short full

motion sequence at the end. With the working title NieR New Project, the game promises a blend of action and RPG gameplay styles (so says the press release), although the presentation didn’t say much more than that.

The main character seems to be an anime style girl with white hair and a  sword. She seems to be in an abandoned world, which is being reclaimed by nature.

The end of the trailer says ‘more information autumn 2015’, which suggests a Tokyo Game Show announcement. The game is being made by Platinum Games (Bayonetta and Metal Gear Rising: Revengeance). It’s worth mentioning that Platinum, used to be Clover Studio and created the memorable Okami and Viewtiful Joe, making this one to watch out for.

NieR New Project is also a PlayStation 4 exclusive and an intriguing one at that.