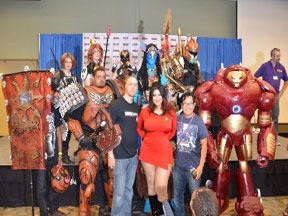 Show is growing, may one day be among the greats

Editor’s Note: GiN Reporter Marie Brownhill travels to conventions across the United States, reviewing them for things like fun, cosplay opportunities, video game related content and how they stack up against others in their area and in the convention circuit as a whole. The following is her report from Baltimore, an emerging Con that is reaching for greatness.

Baltimore Comic Con is very much what it says on the tin: a comics-oriented convention, so for those readers who like comics and are in the Baltimore area, it’s a great convention to hit. The dealer’s floor is very much the focus of the convention, much like at New York ComicCon, and in addition comic luminaries like Mike Mignola of Hellboy fame and Don Rosa who illustrated many of our favorite Donald Duck and Scrooge McDuck stories hang out there. Additionally, Jay and Silent Bob, otherwise known as Jason Mewes and Kevin Smith, were in attendance to promote their new animated film, Jay and Silent Bob’s Super Groovy Cartoon Movie on September 7th as part of a large, three hour event that encompassed not only the screening but also a live pod cast Q&A. Based on the line for seating, the screening was an incredibly popular event.

Baltimore Comic-Con’s other big draw was a third appearance by comic book legend Stan Lee. For $160, not including admission to the convention, fans could get a photo, an autograph, and a Fast-Pass ticket in the autograph line.

Baltimore Comic-Con is also very kid friendly, featuring lots of events for younger comic fans, including workshops on making your own cape and mask that were well publicized on Twitter, and at $40.00 for two-day entry into the convention for adults and free admission for kids 10 and under with an adult admission, the convention is really reasonably priced for family fun. The convention takes place in the Baltimore Convention Center, placing it near the water, the National Aquarium, and other attractions as well, rendering it really convenient for families to have a great time.

Notwithstanding the above, Baltimore Comic-Con is not without its problems. The dealer floor is large and somewhat confusing to navigate. I attempted to track down a good friend of mine who had a booth at the convention and was never able to find him, even after asking for help from a designated convention staffer located in the dealer’s room for just that purpose. While there were panels taking place in the smaller meeting rooms upstairs, I had no idea what they were because I never managed to acquire a convention guide, and if there was a convention app, I never saw any mention of it around the convention and had enough connection issues that a search of the app store just wasn’t going to happen.

Guest signings at each of the publisher booths were announced over a loud-speaker in the dealers’ room, and while I’m sure I was in the minority on this, I had a great deal of trouble understanding what was being said. As far as vendors go, the convention was fantastic if you were looking for rare comics, current comics, and comic-related collectibles, and there were a fair number of local, emerging artists represented in the vaguely differentiated Artist’s Alley. I did like that these same local artists were somewhat intermingled with larger names, though the industry booths were immediately identifiable and easily located.

Comic-inspired cosplay was well-represented with a fantastic Ghost Rider, and a lovely Raven meditating on one of the convention center’s walls. Personally, I adored the balloon-animal Dalek, and there was a fantastic Doctor Mrs. The Monarch from Venture Brothers. That same geek spirit of excitement was definitely present, and I think given time, Baltimore Comic-Con will become something fantastic to rival the bigger conventions. It’s just not quite there yet.