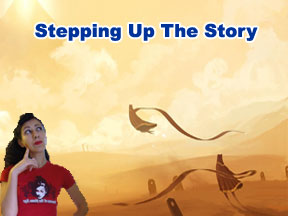 So, unless you’ve been living under a rock, you’ll know that Grand Theft Auto V came out last week. Games websites can scarcely write about anything else. Whether it’s the treatment of women, premature whispers of game of the year or the micro-payments announcement, GTA V is game of the moment and for mostly good reasons. Whilst I enjoy GTA V on a certain level and I’ve been playing nothing else, another part of me thinks there must be more to a hit game with mass appeal than this nihilistic reflection of modern life. Fortunately, Jenova Chen of thatgamecompany agrees.

In an interview this week with The [a]list Daily Chen, the man behind the innovative Flow, Flower and Journey, described how eliciting emotion is the driving ambition of his games. Thatgamecompany is known for its atmospheric and almost meditative gameplay experiences. From following a drifting petal on the wind, to traversing a desert as a silent, robed figure from a mysterious and seemingly ancient culture, Chen is clearly a developer keen to offer an alternative to AAA console games.

Chen says of his goals for the company that ‘We want to make games that not just hard-core gamers, but everybody would like to play, not just hard core gamers’. He goes on to say that games should appeal to the mass audience and how his team experiments with design ‘to create emotions that are relevant to people beyond the hardcore player.’ And now that thatgamecompany’s contract with Sony has finished, he wants to ensure a broad swathe of people can access his games, not just PlayStation owners.

Now that Chen is self-publishing his games, he can take a step back to look at the state of console gaming. He sees a "fairly stable" market, which has spent the last ten years making the same games for the same audience. That market is of course teenage boys and thirty something men. But much like George Lucas recently said, Chen feels that games have more to offer. The both see the way forward as telling emotional stories that aren’t typical of games, currently.

Chen says, "My fundamental view of the entertainment industry is to look at it through the perspective of feeling. Whether it’s film or games or novels, it’s pretty much about feeling. On the positive side you have romance, comedy, action-adventure, drama. On the cold side you have thriller, horror, sometimes science fiction. It’s very much more about feeling than what video games typically say."

Earlier this year, during his keynote at DICE, Chen explained how games currently focus on one emotion. Because games are made to appeal to a male youth audience, they are preoccupied with empowerment fantasies. The main characters all brandish a symbol of power, whether that’s a gun, sword or other, and the gameplay centers around gaining more power.

Nothing exemplifies this more than the GTA series, which Rockstar itself has said will always have a male protagonist. It’s a male fantasy of being able to do whatever you want to gain power without any consequences. And GTA has to be applauded because Rockstar makes the empowerment fantasy so darned beautiful, fun and playable, but fortunately, game developers like Chen are reaching for something more.

At DICE Chen described the development struggle of getting players to like and help each other, rather than trying to kill or exploit one another. The team behind Journey struggled to find a way to evoke an emotional connection between players, rather than just a power conflict. The solution was to give players a reward for crossing paths. If you meet another player in Journey, you both gain abilities and all of a sudden ‘players love each other.’

The issue, as Chen sees it, is that console games appeal to one demographic. He says, ‘the only game in the past that was popular for females, that was really huge, was The Sims because it’s the first game that gives a social feeling between players.’ Journey was Chen’s yearning to create a game that brought players together on an emotional level. Whilst he thinks there are a lot of emotions we don’t explore in games, he is hopeful for the future.

‘Right now the game industry is still at a very young phase,’ he says. ‘The new emotion that was not possible in the past should be possible in the future. What is the equivalent in a video game of a romantic film? A documentary? A drama? What is a family video game?’

While I’m rampaging around Los Santos setting up drug deals and stealing from jewelry shops, at best, I find myself detaching emotionally because otherwise I’d wonder ‘what the hell am I doing?’ However, it’s heart-warming to think that Jenova Chen is somewhere thinking about games that can tap into the full depth of human emotions. Contemplating life and death, in games, doesn’t have to be about emptying some guy’s brains onto the pavement. Journey proves that.