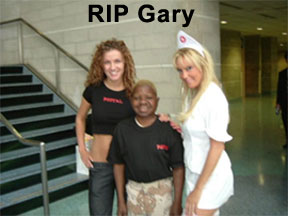 Reporters at GiN don’t get to meet too many celebrities, at least in terms of television or movie stars. Occasionally we might meet someone who was on a show or in a movie who’s promoting a game. That’s how I’ve personally met Vin Diesel, Gary Busey, Richard Dean Anderson, Mr. T and a few others.

But of all those, Gary Coleman seemed the most friendly. It was not as if the others weren’t awesome to meet, but they all seemed professional (other than Busey who told me he was having a terrible bout with diarrhea and asked me not to take any photos). The stars were there to promote a product, and they were friendly and aloof, as stars are want to be when working. Gary on the other hand, seemed to want to have a good time.

I met with Gary when he started working with Running With Scissors, the developers of Postal II. Those of you who played that game will probably remember the autograph signing scene with Gary as the funniest part of the entire adventure. Gary was rendered as himself on screen, and endures a host of people seeking his signature, even though most of them confuse him with actors from other shows, or beg him to say "What'choo talkin' 'bout, Willis?" from his hit show Diff'rent Strokes, even though that (in the game) seemed to annoy him. Eventually your character pisses him off, and you’re forced into a gun battle with him. All the while he spews curses and other funny sayings. It’s hard to shoot when you’re laughing so hard.

When I initially met Gary, his first question to me was "Did I play the game?" And after that it was, "Did you kill me?" I really didn’t know what to say, so I grudgingly told him that I had. He looked really serious for a long time, and I thought perhaps I had hurt his feelings. But then he busted out laughing and said, "I hope you killed me real good!"

Pretty much, I felt like I could ask Gary anything and he would answer me. Apparently the developers knew that too (they are a bit non-traditional themselves) so they just let him run and didn’t try to steer the conversation one way or the other, as PR folks tend to do. It was apparent that Gary was off-script, and some of the things he talked about had little to do with the game.

I was fortunate to meet him several times over the years. It was odd since we didn’t run in the same circles. The last time I saw him was back in 2004 at E3. It’s where I took the photo accompanying this article. There he was, flanked by a hottie nurse and a Postal girl in a half-shirt, wandering around in the basement outside Kentia Hall. He actually recognized me before I spotted him, and waved for me to come over.

Postal II had been out for a year at that point, and it was clear that RWS was getting great press by simply having Gary walk around with the Postal chicks. They didn’t even have to buy a booth. But it was also clear that Gary was mostly there to have a good time. He told me before that he really loved video games, and E3 was the place to see them all back in 2004. We chatted about everything but games for a couple minutes. We were interrupted several times by folks snapping pictures or getting his autograph. He took the time to sign or pose for anyone who asked, whether they were with the official press or just a fan.

If I would have known that was the last time I would see him, I don’t know if our conversation would have been different or not. He invited me to a party after the show that I unfortunately wasn’t able to attend. If Gary and the RWS crew were involved, it was probably a wild, wild time.

When we were finished talking, Gary walked off, escorted by his hotties, who never left his side. He strolled through the security checkpoint and apparently the guard didn’t see his badge. You’ll note he’s not wearing it in the photo. The guard called out "Excuse me" and Gary spun around like a ninja, badge in hand and yelled "WHAT!?!" The guard was kind of stunned and said nothing more as Gary wandered off to have fun in that old school E3 atmosphere.

That was Gary. He was someone you wouldn’t forget. But beyond that, he was an extremely nice guy, a talented actor, and a man who did a lot in life even after being dealt what many would consider a bad hand.

I know he had a lot of personal problems that he was trying to work out. I heard second hand that he had found religion late in his life, and that he was taking it very seriously. In fact, he turned down a role in the Postal II film because he refused to use curse words anymore, and Uwe Boll wouldn’t change the script. Of course Postal II was probably one of the worst Uwe Boll films ever made, and that’s saying a lot about a director who clumsily makes movies about video games with only a passing understanding of the games themselves, and subsequently ruins them for gamers who have invested a lot of love in their favorite titles. Perhaps Gary just didn’t want to be in a sucky movie.

But I can only write first hand about what I know. Every time I met with Gary, he seemed like a really good person without all the fake trappings of Hollywood. He was a fun-loving guy, and didn’t mind poking a little fun at himself. And other reporters at GiN ran into him here and there, and all had the exact same type of experience.

So this weekend I plan to remember Gary the way I think he would most appreciate. I’ll load up Postal II once again, and kill him real good.

Rest in peace my friend. We’ll miss you.