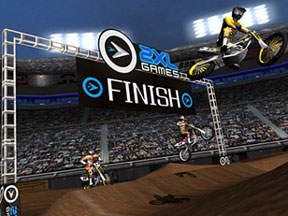 Those of you who play a lot of iPhone games probably know about 2XL. They’ve more or less conquered that arena with some high-end motorcycle racing titles. And now they are trying to move over to the PC, but the transition might be a bit of a bumpy ride.

So we have 2XL Games, the developers of successful console and iPhone titles 2XL ATV Offroad and Baja: Edge of Control. Seems like a natural fit that they would want to come over to the PC, where there is a definite lack of good racing titles, especially for lower end systems.

Enter 2XL Supercross. If the name 2XL Supercross rings a bell, it’s because 2XL Games has also released an iPhone app by the same name. The company says that the PC version of the game is totally new, though we’re not so sure about that. It’s available only thorough Steam as of right now, although that means anyone can download it and start playing almost right away.

While 2XL Supercross runs great and looks great on the iPhone, there is a big difference between that and a PC. What looks good on a three-inch screen could have a ton of flaws when viewed on a 27-inch gaming monitor. Such is the case with 2XL Supercross.

First the good stuff. The tracks look great, very much like the pro tracks they are modeled after. And the bikes look really good too. But there is very weak interaction between the bikes and the track. The bikes seem to glide over the landscape without even interacting with it. No dirt flies up where the rubber meets the road, and your tires don’t even make a mark in the ground. The crowd too, is almost comically rendered. They are little more than 2D placards set in various poses around the track. They don’t move and don’t even look real. Looking at them from any angle other than straight on shows that they are mere posters.

The sound also seems a little off from reality. Take the noises the bike makes as an example. It sounds okay, but has no connection to what your bike is actually doing. When you are at the starting line, you will probably have your brake and gas both pressed down, revving up the engine so you can get a good jump off the line. This should tac out your engine, but instead, you hear your bike shifting gears, sputtering and changing pitch just like you were motoring along. Basically the bike sounds are just set in a loop that plays whenever you hold down the forward arrow key.

Crowd noises are not much better. They seem to boo and cheer at odd times, which I suspect is centered on the actions your character takes. It’s kind of like the entire stadium is there just for you, and not really watching a race with multiple competitors.

Physics are also noticeably off. When you ram into another bike, you will go flying, while the other bike barely wobbles. Landing jumps also seems not to be an exact science. Sometimes when you are rounding a corner, you will be dangling at an impossible angle but be fine, while other times a simple maneuver will seem to topple you.

2XL Supercross is a game that has all the elements right, but does not seem to have a real soul. It’s hard to get into a game when your bike doesn’t really interact with the environment, when the sound is generic, and where you are cheered on by your legion of loyal 2D fans. Despite the company’s claims that this is a totally new game for the PC, I think this is actually just a port from the iPhone. The load screen for races even says "2XL 2009" on it, which is further evidence that this is last year’s iPhone app more than this year’s PC cycle racer.

There are two saving graces that may help pull 2XL Supercross out of the fire, for some gamers anyway. First, the game runs on almost any PC that was made in the modern era. Even older rigs should be able to run it without much trouble. Secondly, it is very cheap, less than $10 on Steam. If you love this game on your iPhone and want to play on the big screen, it might be worth it. Or if you are a PC gamer starved for racing titles that will run on your aging equipment, 2XL Supercross could be a title to tide you over. Beyond that, I’m not so sure how much appeal this title has. It’s not exactly a bad game, but falls well short of the standards we’ve come to expect from a PC title.