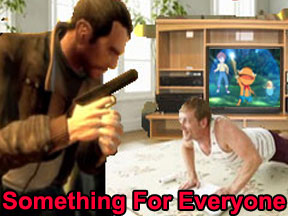 The doubled-edged sword of the saying, ‘May you live in interesting times’ has always been true for the game industry. We’ve seen some incredible highs with games that capture that almost indefinable magic that everyone wants to play, hardware and graphics which transport us directly into a title, and even a few breakthrough moments in storytelling that put the game industry on equal footing with movies and, dare we say it, literature.

But there have also been low points. Acts of violence in the real world, especially those involving guns, are sometimes blamed on video games. And there are groups out there who try to say that when children play violent games, that they grow up to be violent people.

We know that’s not true. And that’s not who we are, as game makers or game players. EuroFiles Columnist Chella Ramanan wrote a wonderful column the other week about really cool games that didn’t involve guns, and many of her choices like Journey and Unfinished Swan weren’t even violent.

But it would be disingenuous for us to try and say that guns, and violence in general, isn’t a part of the game industry as a whole. Conflict is exciting, so it’s a core element of most games, whatever form that might take. Nor would it be fair to mandate that adults shouldn’t be able to play violent games if they want.

Perhaps it’s best to say that video games, like society, are made up of all types. The industry has evolved to the point where no matter what type of game you like, there is something for you.

Taking a look at the list of nominees for the 2012 GiN Game of the Year awards proves this point. We have shooters like Far Cry 3 sharing category nominations with more kid-friendly fare like Skylanders: Giants. Strategy games like XCOM: Enemy Unknown earned props along with pure family adventures like Tiny Bang Story and puzzle games like Flow.

There are games out there like the Grand Theft Auto series that are somewhat polarizing in terms of violence, sure, but also phenomenon like the original Wii console, which made a lot of its fortune with fitness titles and group party games.

The game industry can no longer be defined by one type of game, or one type of gamer. The truth of the matter is that it’s more of a library. Players can come in, browse the shelves, and it’s a safe bet that they’ll find what they’re looking for, even if they don’t know what that is when they start. And as we begin the exciting process of moving into the next generation consoles, experience the rise of more streaming games, and see the successes of many independent studios, this will only become more and more evident.

We indeed do live in interesting times. But it’s good times, too.