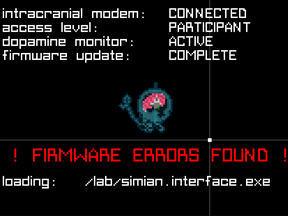 This week I’m being turned into another guinea pig for science; but thankfully I don’t have to kill myself over and over again this time. Instead I get to be a monkey, the kind that you see in movies where scientists make them do little tasks for treats. Don’t worry though, it’s not as boring as it sounds, and you don’t have to walk around in diapers holding human hands. Instead you just get a little chip in your brain to monitor your progress.

As I said, in simian.interface you are a monkey going through some puzzley things for science with the objective of getting the banana at the end of each series of tests. There’s no deep story aspect of the game other than just getting to the end, so don’t expect any turn of events where you get to escape the lab or anything like that. But even if you are just a monkey stuck in a lab, the lack of real story doesn’t take away from this game.

Unlike most of the games I’ve been playing, this one’s particular style was new to me (or at least one I haven’t seen it in a long, long while). It was extremely simple: move the mouse up and down and left and right in order to line up shapes in the correct order. This order ranges from getting all of the smaller shapes into the larger one, lining up patterns, combining colors correctly or just getting pieces to fit snuggly into outlines. You’re never told what you have to do, but luckily it’s not hard to figure out once you start moving your mouse around a little.

Stepping away from the gameplay, the look of simian.interface is both simple and appealing. Though the monkey sprite is probably the thing with the most detail put into it, every puzzle screen and background had a combination of shapes and colors that blend together nicely and read clearly (and since every puzzle has to do with shapes moving around everywhere, being able to see everything clearly helped keep things from getting confusing). Actually, the entire game itself just had this sort of ‘cutesy’ feel to it. Maybe that was because of the pretty pinks, blues and other ‘happy’ colors…

So what else? The music of simian.interface isn’t anything really grand, but it’s not bad either. It’s the normal 8-bit style you’d expect to see with a game like this, and it’s all simian.interface really needs: it’s fitting, sets the mood rather than leaving you to test in silence, and accomplishes what it needs to. Enough said.

In final thoughts I really liked playing this game and wouldn’t have minded at all if it had lasted a little bit longer than it did. There were hints at a larger story that I think could have gone a bit further (which you guys can see when you too see the cat peeking in at your progress), but even with not being expanded upon it was amusing to see.

So in conclusion, simian.interface gets 4 bananas out of…wait…4 GiN Gems out of 5!