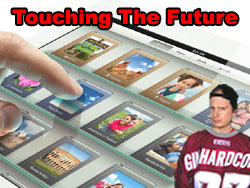 About a month ago I was one of the lucky few to get an ASUS Transformer Prime tablet. When it was first announced, it was considered one of the few Android tablets that could end up giving the iPad 2 a run for its money, and even possibly one-up it with all of the features that were not available: a microSD card slot, lightning fast quad core architecture, and an impressive 10 hour battery life which was made even better if attached to its keyboard dock, one that added yet another SD card slot for expansion.

Also, need I say how much it helps that since it’s an Android tablet (running 4.0 Ice Cream Sandwich too) that I can run Flash in a web browser?

So I was very happy with my purchase, but there was always that select few that kept asking me, &#34;Why don’t you wait for the iPad 3 to come out before you made a purchase?&#34; Well for one, I’m impatient. And two, based on what I’ve seen for the first and second iPad models, there wasn’t enough to warrant a purchase for me, especially since I had a current generation iPod touch.

Well, this week Apple held their press event for the launch of the iPad 3, or as they are technically calling it, &#34;the new iPad.&#34; After hearing an hour of the same old Apple rhetoric: constantly bashing their competition, showing off their Apple Stores all around the world, and of course, Tim Cook and Phil Schiller spewing out the classic Jobs-isms about the device being &#34;magical,&#34; &#34;revolutionary,&#34; &#34;amazing,&#34; &#34;incredible,&#34; etc. etc. etc., I came away unimpressed with the final results of &#34;the new iPad.&#34;

Ok enough with that &#34;the new iPad&#34; name. I’m just going to call it the iPad 3 from here on because that’s really what it is.</p><p>The first announcement of an iPad 3 upgrade was one that was expected for a while. In fact, many ask why the iPad 2 did not include it…the addition of the &#34;retina display&#34; that debuted on the iPhone 4. I will admit I experienced it on my iPod touch and it is very stunning. iPad 3’s Retina Display is 2048×1536, the highest resolution on any tablet.

Of course, a higher resolution means a processor boost, and that’s what the iPad 3 does with Apples new &#34;A5X&#34; processor. Many people expected it to just be a quad core such as nVidia’s Tegra 3, but the A5X is actually a dual core CPU that also uses a quad core GPU. To me it falls in the same level as older game consoles such as the TurboGrafx 16 (which was actually an 8-bit CPU) and the Atari Jaguar (claimed as a 64-bit system but had two 32-bit processors running on a 64-bit RISC architecture.) How it works out in the long run is yet to be seen, especially since Apple claims the A5X has 4x the processing power of the Tegra 3.

Everyone expected the iPad 3 to include the biggest gimmick of the iPhone 4S: the Siri personal assistant. That isn’t completely true, but a limited version of Siri is present, but only as a dictation device capable of understanding six languages (US, UK, and Australian English, French, German, and Japanese.) The camera has also been updated, as it is now a 5MP, five element f/2.4 lens with autofocus capable of shooting video up to 1080p. It’s a nice bump, but I’ll stick with the 8MP camera on my Prime, especially since it already is capable of 1080p video.

Finally, there’s the connectivity issue. When the iPhone 4S was announced last fall, its biggest criticism was the lack of 4G, though Apple tried to cover it up by claiming it had faster HSPA+ speeds (which of course, was sweet for the GSM network-loving AT&T and didn’t mean jack to CDMA users on Sprint and Verizon.) The iPad 3 now is capable of 4G LTE, but only for the AT&T and Verizon networks (as well as Rogers, Bell and Telus outside of the States.) As usual, Sprint is left out of the equation, but this is probably more towards Sprint shifting from their current WIMAX 4G network in favor of its new LTE one. Still, I wouldn’t want to switch providers for the iPad 3. I didn’t add AT&T service when I got my PlayStation Vita, so why am I going to change for the iPad 3?

Why am I critical of iPad 3? Well my biggest criticisms of iPad 2 were not rectified. Aside from the previously mentioned Flash support (which we know Apple will NEVER include in their products) there is still no expansion memory slot on the device. I really wish that Apple would realize that consumers want to expand their device in the way that several Android tablets can. Even Samsung realized that by adding a microSD slot to their Galaxy Tab 2 (the original mistake was the deciding factor on me getting the Prime.)

Finally, there’s that darn ball and chain called iTunes. I prefer to just load the movies and files I want onto my tablet and just move on. But with iTunes if there’s a movie in my collection that is not compatible with it, I have to take the time-consuming process to convert it and use the converted file on the iPad or iPod touch. That’s not to mention the wasted hard drive space on my computer for a second identical movie. (Yes I know I can just delete the first one, but I choose not to.)

Yes, I know there will be those who are already in line waiting for the iPad 3 to launch on the 16th. I wouldn’t be surprised if there are people camped out at Apple Stores already to be first in line. But eventually, I will be like the girl in the Samsung Galaxy S II ads standing outside that silly line with my Transformer Prime tablet. Maybe I might convince some of the people waiting that the iPad 3 isn’t really all that.