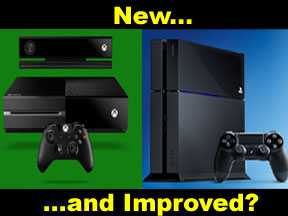 Which new features are you most excited about?

The clock is ticking. As of last check, you could still get into a pre-order program at most places in order to scoop up the early buyers rewards for both the PlayStation 4 and the Xbox One. There will probably still be some scarcity at launch time for both units, but if someone really wants one in time for the holidays, its probably not going to be impossible.

I’m not going to get into the whole PlayStaiton 4 versus Xbox One debate right now. Suffice to say that there are some very good reasons that people would want to purchase either console, or both. And as Todd Hargosh pointed out last week, there’s a whole other console war brewing over on the Android platform, so we’re not starved for choice at least.

But today I just want to talk about the PS4 and Xbox One. What I was thinking was more what Chella wrote about, when she pined about some missing features from GTA V that she really wanted to see in the game. Some of them were things like surfing and basketball, which were probably left out based on a choice made by Rockstar. They already created a pretty good tennis and golf engine in a game that’s not at all about sports. Coming up with something for surfing and basketball might have been a little much given that not everyone would even do those things in the game. I think I played tennis twice and golf once for example.

However, some of the things she wanted to see, like more interiors in buildings, especially bars and nightclubs, would have been pretty amazing. Even the bars you can purchase in the game are closed-off shells, which seems odd given that there was a working club in The Ballad of Gay Tony DLC from GTA IV which featured dancing, drinking, picking up girls and even the ability to work as a bouncer. It would not have been hard to take some of those interiors and the dance game and simply drop it into clubs in GTA V. But I wonder if it was the hardware that prevented it from happening?

GTA V already looks like a next generation title. One can only assume that it’s pushing the Xbox 360 and PlayStation 3s that it’s running on pretty hard. Adding lots of interiors to the main world might have simply pressed the hardware too far. They might have had to either add in loading screens, something that GTA fans would likely have hated, or taken away some of the cool stuff to make room for others.

In all the marketing for both consoles, I’ve not seen any developer or publisher talk about what the new hardware will actually enable. All the focus has been on the graphics, or the network, or whether or not you will be able to play used games. I’ve not really heard anybody say that the new console will allow them to have, for example, a GTA-like open world but with completely created interiors where you can literally walk into any building you want and do something. Because that would be amazing. The closest thing I’ve seen to that has been Watchdogs, where every person in the city seemed to have a history that you could tap into and find out about. Then again, that title has been delayed until the spring of 2014, so we lose that example. And it was supposed to also run on the PS3 and 360, which would have made it interesting to compare the different versions.

My point is that the thing I’m most looking forward to on the new consoles is having games, especially open world ones that tend to take up a lot of processing cycles, be able to become a lot more in-depth.

I’ve also had some problems with big name games not running all that well on my PlayStaiton 3. The Bitter Springs mission with Boone in Fallout New Vegas drops my framerate to less than one per second. Getting through that five minute sequence takes hours. So better performance would be nice too. Playing a game like Skyrim on my PC is a fluid and beautiful experience. On my console, its still fun, but doesn’t play quite as well.

So for me, its all about better performance and being able to enjoy the performance the new gear should offer.

Others are looking forward to a graphical jump, and that’s not a bad thing either. When we reviewed Skylanders: Swap Force our reviewer noted how amazing the graphics were compared to the older games. But in talking with Activision, I learned that the version of the game for the Xbox One and PS4, while functionally the same, would look even better. That will be a sight to see for sure.

Still others are simply looking for new games. Some titles like Ryse: Son of Rome for the Xbox One and Knack for the PlayStation 4 look rather intriguing. And some of the things that a game like Bungie’s Destiny will do probably wouldn’t be possible on the old hardware.

So I am just wondering what most people are looking forward to with the new consoles. There have been hundreds of thousands of pre-orders, so you all must be looking forward to something. Let us know what you think are the killer apps and features you want to see with the new gear. Send in your thoughts to editor (at) gameindustry.com or simply type your thoughts into the comment window below.

Here’s hoping that everything you want in your new console comes to pass. Good luck with that!