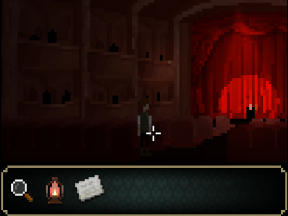 For a Third Time

This week I’m returning to a series that has found a special place in my gamer heart. That’s right, I’ve returned after playing another chapter in The Last Door series. This time I take a look at the third chapter in the franchise: The Last Door Chapter 3: The Four Witnesses. If you haven’t read my reviews of the first and second chapters, then I highly advise you to do so before reading this one.

The Last Door Chapter 3 picks up immediately where the second one left off. Devitt breaks out of his would be tomb and finds that he has somehow been transported to London.

Confused and lacking hydration, Devitt sets off to find a way to quench his thirst. After taking a drink from a dirty drain pipe, Devitt passes out. He awakens and chases after a man in a red coat, only to realize that he is now lost in a London slum. Speaking with the locals reveals that everyone in this area seems to know about the giant Cthulhu-like crow god that has haunted Devitt’s nightmares for the last two chapters. None of the people are straightforward though; leaving Devitt to find his own way out of the slum and to learn more about this god-like being.

Gameplay in chapter 3 hasn’t changed much. Player’s will move around and solve puzzles with mouse clicks. Slightly different is a new type of puzzle in this chapter. One of the puzzles requires the player to piece together clues from text to understand which sounds will lead them down a proper path. It was a neat change to the click this item and this item one after another to proceed puzzles that have dominated the last two chapters.

Also different is Devitt’s walking speed. In the first chapter Devitt was very slow, which made backtracking a pain. Devitt learned how to power walk in the second chapter, but this left him brashly strutting down dark corridors as if he feared nothing. In the third chapter, Devitt has found a balance between the two. He will power walk when in well lit areas, but will slow down in dark areas where he has to use a lamp.

Graphics in Chapter 3 are the same as the first two chapters. Characters and background are really pixilated, but don’t look so bad that one would mistake them for an Atari game. Returning this chapter is the close up of the crow god’s eye (the picture included in my review of the second chapter), which gave me a good scare in both this chapter and the second chapter. I even knew it was coming this time around and I still had a mini-heart attack.

When it comes to audio, The Last Door series never ceases to amaze me. At a few different points in the game I had to make Devitt walk past rotting meat. Both times I heard a buzz in my ear and started looking around my house for a fly. It wasn’t until the third time that I realized that it was a sound effect coming from the game. Part of what makes The Last Door great is that minute sounds like this can be found all throughout the game.

I also really enjoyed the soundtrack for Chapter 3. The tracks are absolutely beautiful. At one point I stopped playing to talk with Alia and after we finished our conversation I just sat there and listened to the music without playing the game.

The Last Door Chapter 3: The Four Witnesses is another great entry into the series. The Lovecraftian styled story has continued to keep me interested since it drew me in during the first chapter. The music was beautiful and sound effects were spot on. The graphics in these games are never great, but that’s about the only negative thing I can say about the game. I can’t wait to play chapter four when it comes out in January.