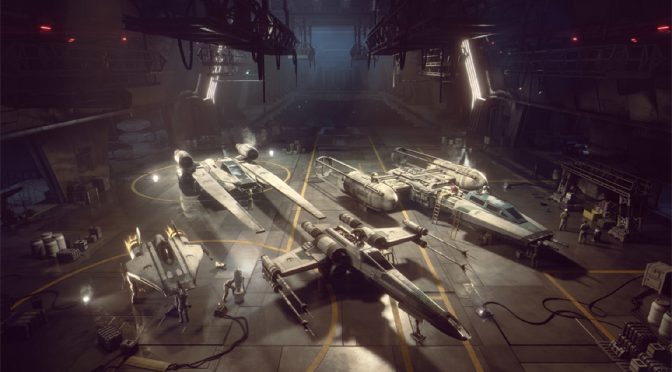 My awesome wife got me Star Wars: Squadrons because I am a Star Wars ship nerd. I was excited to dig into this game and I was primarily going to be doing the single player campaign. Now before I go further, this is a not a review of Squadrons. For a review of Squadron go look at Chief Editor John Breeden’s review here. What this column chronicles is my disappointment as I completed the game.

The game itself was fun and on my PlayStation 4 it set up quickly and the game was even exhilarating at times, like the mission where you fly a Y-wing to bomb a deep space Empire transmission station. This included a section where you have to fly through a tight area and bomb the core and get out quickly, just like every movie in the series. That particular mission gave me hope about where this game was going, since it was early in the set of what few missions the single player game offered. But it was over way too soon, and that light of hope blinked out as quickly as it appeared.

When the game ended, nothing had really changed. None of the characters had died or grown at all. The major plot device was built and destroyed and everyone just kind of shrugged and moved on. So after less than twenty hours, I had accomplished nothing. That is one of the feelings I hate the most as a gamer. And it was in the aftermath of completing the story and I was shuffled toward the online battle that I can’t do since I don’t have PlayStation Plus.

This made me wonder if I feel this way because I’m an old gamer who hasn’t adapted to new trends or if being a game journalist has made me overly cynical. This has been the first title that has really, and I mean REALLY, got me wondering if I am just too hard on games or if they just aren’t as fun for me to play anymore.

I still enjoy games and the few series I can get into I clutch on to for dear life. I’m curious if any other gamers have got to the point where they play a game and after like an hour or so they just feel like they are just playing another version of the same game they’ve conquered before. Maybe because I’m getting older as well because I am starting to hate games that are short and leave me without a feeling of accomplishment.

Make no mistake, Star Wars Squadrons could have been legendary if they had included more than 15 single player missions in the game. If there were more missions reminiscent of the old Rogue Squadron games, then people would still be taking about Squadrons years into the future, just like they do with the classic TIE fighter and X-Wing games made by LucasArts.

In fact, Squadrons could have been so much more addictive if I could have chosen my side (you hop back and forth between the Empire and the New Republic) and I felt like everything I did led me to a satisfying conclusion, you know, helping your chosen team to conquer a sector or get some advantage in the ongoing hostilities, maybe even do something that turns the tide in some way. It’s a big universe, so there is a lot that we could have done that would not have broken canon. Instead, I felt like Squadrons was a fifteen-mission tutorial that was basically just a vehicle to get your ready for online play.

I guess my point with this column is to see if any other gamers are having the same issues I’m having. Also, I guess it is to peel the curtain back a little and show how exhausting being a games journalist can be at times. It’s one of those jobs that seems fun and easy, but it can wear on you a bit, especially when you have high hopes that are not met by the games you should love.

As a final note…EA once again made some bad choices and ruined what could have been an amazing game. Oh well, please stay safe everyone, and let’s be happy that at least the year 2020 is behind us.