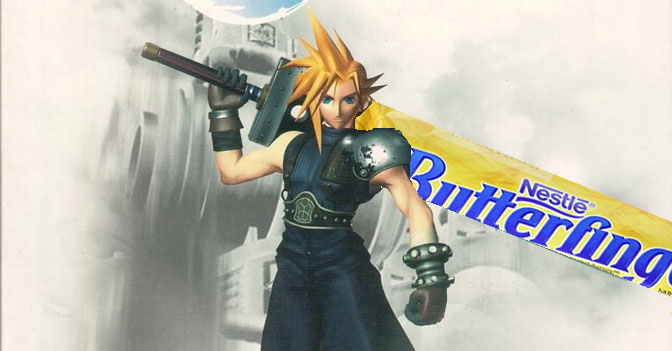 Hello friends and followers of my column, I hope you are comfortable and ready for this shocking revelation… Final Fantasy VII Remake is in my crosshairs again. I know it was only my second column where I insisted there were better games to be remade than this one. Now, I get to Frankenstein my Final Fantasy and Microtransaction pieces together to form this very angry/disappointed piece about FF7 DLC. To elaborate, here is the article published by Siliconera that shows a DLC event for FF7. TL: DR for the folks who didn’t want to read the article, there are exclusive DLC items that can only be obtained for a limited time, in limited quantities, by buying special candy bars.

So now I am now holding this onion of personal rage and I would like to take time out of your day to peel the layers off and show you why I feel the way I do. There is so much wrong with this it is taking every bit of self-control I have to not type expletives in this column. Allow me to peel back the first layer and that is the unintended consequences on gamer’s health. Before we begin, no I am not a doctor and my wife is the one with the pre-med degree, not me. However, I will be using available statistics to draw a logical conclusion to this issue.

Let’s all be straight; gamer diets aren’t the best. I remember growing up with an N64 and a pop can pyramid three feet tall in the corner of the living room. There may be a stereotype of gamers constantly ordering pizza and, again let’s all be honest here, how many times have we ordered a pizza to keep gaming. My local Domino’s Pizza has me on speed dial and every so often they check in with me since I have eaten less pizza while dieting. This advertising plays right into the junk food industry and will not have good effects on gamers.

Final Fantasy VII has some of the most diehard fans of any game and the opportunity at limited edition DLC will be too much for many fans to resist. Some items require two candy bars to obtain and has the most amount available. For the sake of argument, we will use the average price of a Butterfinger at $1.12 each. This number was the average of Butterfinger prices from five major retailers. Based off of this number, two candy bars will cost about $2.24. That is not back breaking and if people eat these candy bars that is not out of the norm. However, some of them require ten candy bars and have the lowest amount of DLC available. That means the gamer is asked to buy $11.20 worth of candy bars as soon as possible to try to get this DLC. This does not include the other DLC that was developed and sold independent of this event.

Personally, I don’t like pinning limited edition of DLC to unhealthy items such as this. This forces some gamers to make s choice, especially those who are on diets or have diabetes. This places a heavy FOMO on people who don’t want or should not be purchasing these special items. This could cause diehard fans to make bad choices just because a gaming company is exploiting their love of a franchise. Morally, I think it is repugnant to attach limited edition items on candy bars to boost sales of a product.

That is the moral side of the argument and, if that doesn’t concern you because you hate Final Fantasy or love Butterfingers, here is a business reason why this is bad. If they sell out of the DLC and Ferrara (company that bought Butterfinger from Nestle) gets a sales bump from this stunt, guess what everyone, it could turn into a feeding frenzy. Imagine Call Of Duty hiding weapon upgrades or other DLC content behind Mountain Dew bottle caps. Instead of buying X of an item like the bull crap I mentioned earlier that it is all on redeeming random codes to try to get this DLC. Or McDonald’s partners with Fortnite to hide limited edition items in a Monopoly set up where you have to pull tabs for a random chance of getting this item.

Before anyone says, “no one is stupid enough to do that,” I want everyone to stop what they are doing and think. How many people do we know that play McDonalds monopoly and goes to McDonald’s more than normal to try and win? How many people do we know that has a game they love so much they buy literally everything they can for that game. The reason this strategy works is because diehard fans want the item and don’t care about statistics of getting it. Here is my issue exposed in math (please stay with me) to illustrate my point.

Factor in how many candy bars (30) it will take to get all of the DLC and the risk in it not being available after your purchase means after spending about $33.60, you could only end up with part of the DLC. Essentially, you paid full price and got only part of the DLC. What complicates the formula above is that if this proves well and companies decide to go with the random odds model mentioned earlier, then the amount you, the gamer, pays could increase greatly and, at the same time, the odds of getting the desired DLC drops sharply. This would make the formula look something like this:

This shows that what your money buys can be shown as a range of numbers. I don’t expect my readers to understand functions and statistics, just remember that we went from money to DLC went to money may or may not buy you DLC. Corporate sponsorship of DLC is a bad idea economically and morally. Coca-Cola making gamers buy enough 2-liter bottles to supply a pizza party at a large frat party is not beneficial to the gamer. Thank you all for hanging in for this long column and I would love to hear any feedback. Stay alert out there and watch out for companies taking advantage of your fandom.