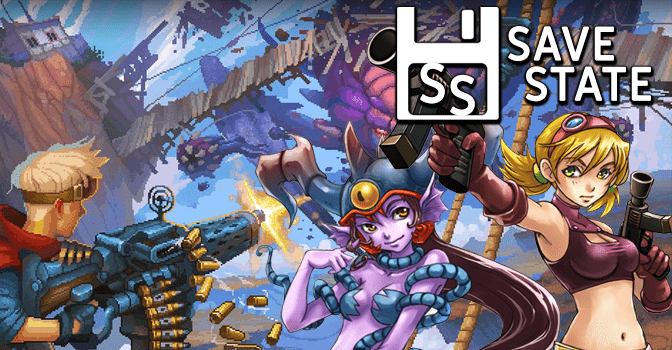 Welcome to Save State, where we dig out our old handhelds and check their batteries to make sure they haven’t exploded. You see, dear viewer, some time ago I noticed the battery of my Gameboy Advance was bulging, so I sent it off for recycling and purchased another battery from elsewhere, thinking that would solve my problem. Unfortunately that battery, too, caused some problems when it popped the battery door off the bottom of my GBA SP while it was charging, causing me to call both an electrician and an exorcist (one guy did both jobs; apparently the market for AC/DC priests is misunderstood). I got a new battery, once again, and elected to play a game to test it out, but wound up playing it all weekend. So the first game I’ll talk about this week is Sigma Star Saga, for the Gameboy Advance. 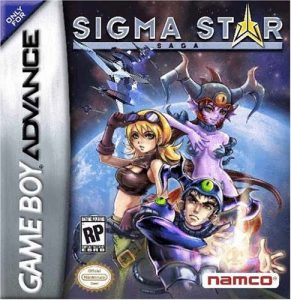 In Sigma Star Saga, you play as a fighter pilot named Ian Recker, who ambivalently leads a counterattack against an invasive alien force called Krill. He soon gets sent undercover as a Krill to gather intelligence about an alien superweapon, and the lines between friend and foe become blurred when Ian has to come to a realization that perhaps not everything was as it seemed. What made Sigma Star Saga truly unique was that it largely existed in two modes- you could play as Ian on foot, in top-down RPG segments, but combat encounters are actually 2D shmup (shoot em up) segments in which you shoot down opposing forces using your star fighter and unlocked weaponry. This juxtaposition of shoot-em-up gameplay alongside JRPG exploration is not without problems, but was extremely interesting as very few games attempted such a thing in the past.

As you could probably ascertain from the above, Sigma Star Saga is a bit of an anomaly, gameplay-wise. In the JRPG exploration segments, you control Ian directly and can search the areas for items, data, shoot enemies, and talk to a variety of characters to get a better handle on the story and lore. Everything you earn in the RPG portion also comes into play in the ship battle segments, where you control a fighter ship using weapons you assemble via Gun Data. The top down JRPG segments are probably most easily explained as playing like Quintet RPGs like Illusion of Gaia and Soul Blazer, while the shooting sections can be compared to Darius, Lords of Thunder, and other horizontal shmups from the days of yore. To level up, you collect orbs in the horizontal shmup section, after killing enemy aircraft.

The aforementioned Gun Data system is another area where Sigma Star Saga carves a surprising niche for itself: Collecting data chips in the exploration sections will give you new Gun Data, which you can then use to modify the shot type of your spacecraft. Cannon data changes how you fire your shots- some will let you shoot where you’re moving (letting you shoot diagonally), some shoot in front and behind, that sort of thing. The Bullet type changes what you’re firing- single, flat beams that pierce, large orbs, or even an orbiting helper that fires alongside you, that sort of thing. Lastly, you have Impact data, which changes what your shot does when it collides with an enemy, so your shots can do things like splinter on hit, erase enemy shots, or drain health every so many hits. There’s around 20-28 of these per category, which means you have a large amount of variety in how you customize your ship to take on the spaceship battles.

Due to the fact that Sigma Star Saga is one part RPG, one part shmup, when you’re in the exploration segments you may come across powers that let you access new areas you couldn’t before, or find a scanner that lets you see hidden items. Finding these items typically means that you’ll need to do some backtracking to get new items and upgrades. Backtracking isn’t explicitly needed to complete the game, mind you, but it can be helpful to have access to more shot types.

One downside to all of the customization available, however, is that you cannot change your weapon loadouts while in a battle- so if you try out a new shot, and it’s absolutely terrible, you might struggle with that random encounter. Also, yes, just to be clear: There are random battles in Sigma Star Saga, and those encounters shift you from the JRPG mode to a shoot-em-up stage where you control a random ship with your specified weapon… which another downside is that all of the ships control differently, and you don’t have a lot of influence on what ships you get to pilot for encounters.

What’s even more out of place for a Gameboy Advance game is that Sigma Star Saga has four endings, all based on what actions the player takes in the final chapter of the game, though one particular ending is locked unless you reach the end via a New Game+ save. Sigma Star Saga has a tremendous amount of charm in how it utilizes its storytelling to combine multiple, seemingly disparate, gameplay mechanics, and the visuals and music only serve the help sell the charm of the characters involved. It only makes sense that the presentation is charming, considering that Sigma Star Saga was created by Wayforward, the makers of Shantae.

All in all, if you like unique RPGs with interesting combat mechanics, Sigma Star Saga might be an excellent game to waste a weekend with- it certainly did that job for me. The second game I’ll mention this week is an interesting one that I actually wound up spending a good deal of time in front of my computer, saying, “I should go to bed right after this” and then two more hours passed. The game in question is Black Skylands for PC, currently released in Early Access.

Early Access games are always a crapshoot, because it’s hard to know if the developers will actually wind up adding all of the content they say they will. For this reason, I typically try to only bring up Early Access titles when it’s one that I’ve had a significant amount of fun playing. 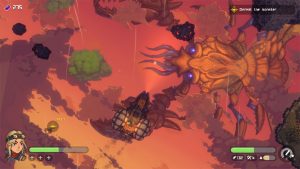 Black Skylands is a shmup RPG about sky pirates- which is interesting that I’ve played two shmup RPGs in a single two week period, but hey, you take what you can get. The story of Black Skylands is told with pixel art characters and dialogue windows- similar to other RPGs out there. The cutscenes aren’t skippable, at least not yet, but what story is there is reasonable enough to give impetus for the adventure of the main character, Eva. You control Eva on the ground like you would in Enter the Gungeon on PC- use the mouse to rotate your character, and you have a button to shoot, reload, dodge roll, etc., as well as fire a grappling hook, which is one of the nicest features Black Skylands has since you will use the hook a lot both in and out of combat.

There’s a huge world for you to explore in Black Skylands, with outposts and various locations you can visit dotted all over the map. Initially, many of these locations will be occupied by bandits, and with a little bit of skill and possibly some luck, you can explore just about anywhere you want right out the gate. The starter ship you’re given is extremely slow- and handling multiple combatants at once can be difficult because turning is cumbersome. Once you start collecting enough resources to upgrade your ship, however, this issue alleviates until, eventually, you feel like King of the Pirates and can handle your ship with ease. 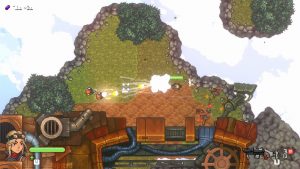 While exploring the various islands, you’ll discover side quests you can complete, as well as hidden loot, so it tends to be worth it to explore the various locations of the map. Each zone has its own strength, so some areas will be easier to conquer and free from bandits than others, especially when you’re just starting the game. A lot of the loot in Black Skylands is progression based, so just grinding endlessly won’t get you access to all of the best items and upgrades in the game. There will come a time where you will need to progress the story to unlock the next tier of materials to craft upgrades for your ship’s fuel tank, hull, engine, propellers, etc..

As you progress through Black Skylands, you’ll unlock the ability to build your own facilities, which is a core component of Black Skylands’ gameplay loop. Setting up a garden can get you needed materials or items you can sell for cash to buy resources from shops, while the armory will allow you to craft new equipment, upgrades, mods, and even boosts for your player character. Even for Early Access, there’s already a huge number of items to craft in the game, and a lot of time can be spent poring over whether to use your materials or money to craft a new gun for Eva, or just use mods to improve some capability of your existing weapons. There’s a plethora of options already available, and many synergies that players can utilize for their grounded and airship weapons to make their approach to the game feel unique.

The two different combat schemes of Black Skylands mesh together like peanut butter and jelly. Combat on the ground behaves similarly to other top down shooters, and while I used Enter the Gungeon as an example, mostly because the on foot battles are faster paced, and more easily compared to a bullet hell. Ship battles, on the other hand, are pretty nuanced since you leverage the maneuverability of your ship to attack others with your cannons from a better position until you blow them up, and the inertia of the ship gives the combat a much more weighted feel. It can take a bit to get used to the airship combat since your starter ship is extremely slow, and low maneuverability makes avoiding shots much harder than it needs to be. Once you get beyond that starting hump, though, you’ll be destroying enemy ships and reeling in their cargo like nobody’s business. 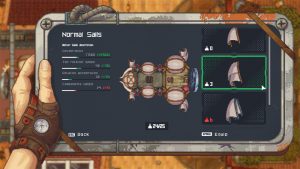 Being an Early Access title, there were some weird bugs that popped up that I didn’t quite know how to resolve, like menus getting stuck on screen, or the controller prompts didn’t quite do what they were supposed to, things of that nature. This will definitely be one to look out for once it reaches a later level of polish, however, because what’s in the game right now is extremely fun and rewarding, but running into a game ending bug can make play very frustrating (which, for clarity, I did not personally run into a game ending bug in my hours of play, though it is worth mentioning that I started play probably a week after patches were issued for some of the most common game ending glitches). Also, since the game is probably only half finished, a lot of what would constitute end game gear simply don’t exist at this very moment, but wishlisting and keeping an eye on this one might be a great idea for later down the road.

That being said, however, we can consider this entry of Save State closed. Join us again in a couple of weeks when I attempt to potty train a Dalmatian.