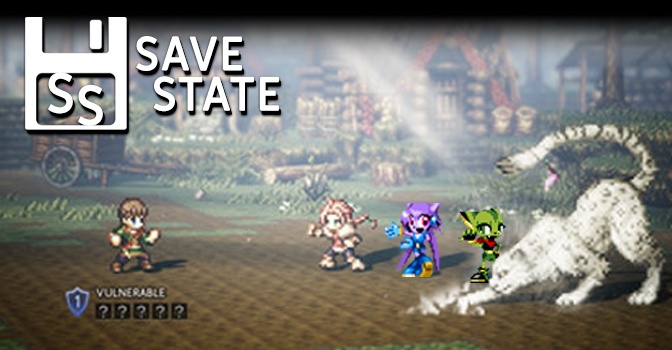 Welcome to Save State, where the Backlog is, like Olberic, Unbending.

These last couple weeks I took some time to finish off some games that I had started around when they came out, but put down for some reason or another and didn’t return to finish them until quite a good deal later. One of these games is a 2D platformer, while the other is a JRPG. I think we may be noticing a pattern, here. 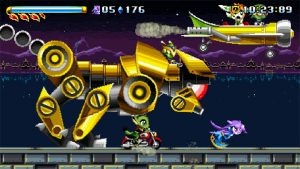 Freedom Planet is a rock solid 2D platformer with the visual flair of Gunstar Heroes and the gameplay style of Sonic the Hedgehog. It originally released in 2014, though I didn’t actually finish it until recently… despite somehow owning it on two separate platforms. I apparently had it on Steam but bought it again for Switch without realizing. The problems with having an 800+ game backlog! In any case, Freedom Planet is a face-paced platformer by GalaxyTrail that has been released on basically every gaming system by this point. Except Xbox. Don’t know what that’s about, but if you only have an Xbox… you can’t play this game I guess. For that, I forgive you. To be serious, though, this game will likely run on a low end laptop since it is not very performance intensive.

There is a story mode, called Adventure, where you play the levels intermixed with some story cutscenes. Classic mode lets you skip the story, and Time Attack lets you replay levels via level select menu. The story follows Lilac and two other heroines as they adventure through the land of Avalice to prevent war. The story is full of colorful moments, some fit the bill to be called, “Awesome,” while others are pretty ham-fisted and cheesy, but it’s a lot more story than what some would be used to in a 2D platformer. The good news is that, for those who don’t want text boxes interrupting their play, Classic mode lets you just explore the levels in their respective order.

Each character of Freedom Planet is similar to one another that you won’t have controls-shock by playing a different one, but each has their own special ability you can use to jet through stages. Lilac, the purple dragon girl, can double jump, or charge up and fire herself off at high speed (like the dash of the knight from Rocket Knight Adventures). Carol the wild cat has rapid melee attacks, a pounce that lets her gain horizontal momentum, can cling to walls, and can roll into a ball like Sonic to gain speed down hills. Also, she gets a motorcycle and that, therefore, means she is the best. Milla the hound is slower than the other two, with lower health to boot, but she can float by flapping her ears, and can make blocks and shields to attack enemies at range and deflect attacks. The different characters actual greatly improve the game’s replayability, since they have a variety of different actions they can do. 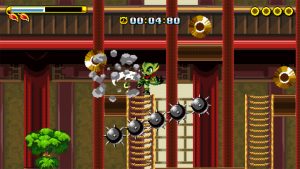 Platformers live and die by their level design, and Freedom Planet excels in this category. A lot of the levels are sprawling and feature multiple paths and lanes you can use to get to the end of the stage. Even excluding pathways that can only be accessed by one or two of the characters, there are many routes as you progress through each level. The focus of Freedom Planet is on speed, so a lot of levels will go by fairly quickly, and you’ll soon arrive to boss fights that can be reasonably challenging on Hard mode, where their attacks are randomized rather than going through scripted patterns that are easier to deal with (though one of the bosses seems… much easier than what I recall playing from a few years ago). The themes of the stages are decently varied too, so you should be entertained by the environments, too.

Freedom Planet is really an excellent game, and was one of the best indie 2D platformers for years. I strongly recommend trying this game out, as it has low resource requirements on PC/Mac, and is also playable on PS4, Switch, and… also Wii U if anyone still has one of those plugged in.

As has been tradition, I also finished off an RPG that I’ve long been meaning to reach the end of: Octopath Traveler. A popular release on the Switch in 2018, it released on PC a year later, and also on Google Stadia a year after that. How about that, some positive Stadia news! Poking fun at Stadia aside, Octopath Traveler isn’t a game about undersea mollusks, it’s actually a turn based RPG mixing retro pixel graphics plus modern day effects and lighting for its visuals. More than just its graphics, Octopath features an incredible orchestrated soundtrack and 8 character driven stories that all pull together by the end. 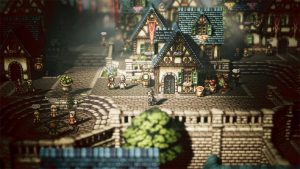 In Octopath Traveler, you start off the game by selecting one of the characters you’d like to be your main throughout the adventure- this character will be present on your team for much of the game. There is Ophilia the cleric, who carries out the pilgrimage of carrying a sacred flame throughout the land instead of her adoptive father or sister. Cyrus the scholar is a professor at an academy for royalty, but leaves his position when he discovers that a colleague has been stealing ancient tomes and selling them to pay off his debts. Each character has a particular quest or reason that they’re spurred onward- broken into four parts. Every single character also has some interaction with an item, boss, or something to that extent that also connects into a single thread that involves the overarching story, though a lot of that is delivered almost as a text dump (a la Xenogears 2nd half) after beating each character’s individual quest lines.

Presentation is not Octopath’s strong suit. While the entire cast is colorful and full of great characters with a wealth of personality, interactions between the characters is only really delivered as quick, off-hand exchanges called Travel Banter that pop up when you have specific characters in your party while completing a variety of quests. These exchanges are no more than 3-4 text boxes per character involved, and are similar to skits from the Tales of series. So, what’s wrong with that, you might be wondering? 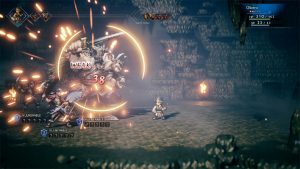 The problem is that these are the only real times in which characters interact until the absolute end of the game, basically. Imagine if any time a villain talked to Yuri from Tales of Vesperia, every single other character just disappeared out of the cutscene and none of the other protagonists had anything to add. There’s a solid 3-4 hours’ worth of dialogue from Travel Banter alone in the game, it’s just an odd design choice that is somewhat esoteric and disconnected from the overall narrative, but it is absolutely better than having different characters randomly pop in and say throwaway lines during important cutscenes, as this gives you more insight on how the individual characters interact.

What Octopath lacks in character interactions, it more than makes up for in overall character customization. Each individual character has their own class, such as the magic-oriented Scholar or the physically powerful Warrior. Each character can equip a sub class in addition to their main, which will allow you to use the powerful buffs and dark element spells of the Dancer class, plus the powerful elemental spell skills of the Cyrus’s Scholar class, for example. Each class has support skills, which can prevent surprise encounters, give you a 25% chance to not use a consumable item, or even allow you to  endure an otherwise lethal blow if your HP isn’t critically low.

Leveling jobs, as well as finding the four hidden ones, will give you loads of options to approach boss encounters in the way you find most efficient. Since Octopath is a turn-based RPG, not a lot of time needs to be spent on its battle system as it is very similar to those that came before it, but it does have a couple neat twists: Your characters can “break” enemies, whereby hitting their weaknesses a certain number of times will reduce their defenses and cost them a turn. You can also store up boost points each turn, which you can use to attack multiple times per turn (akin to Bravely Default’s “Brave” system). Early encounters basically teach you the game’s systems, but by mid-game you’ll have enemies changing their weaknesses and number of hits needed to break, etc., to change up the flow of battle. By the end of game, I had a dancer and merchant slinging defensive buffs and BP like $1 beer at a music festival, so I could hammer home my most damaging attacks every turn while mitigating the utterly insane damage the end/post game bosses could deal. 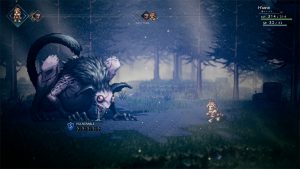 Outside of the story and gameplay, Octopath Traveler is also visually gorgeous and audibly sublime. It boasts one of the best soundtracks in recent memory, with calm, dulcet tones for story developments, and hard-hitting, enthusiastic chords for battles and boss encounters. The pixel graphics look for characters may seem at odds with the fancy lighting and effects used in overworld maps and battles, but after a brief bit of time with the game, it will just draw you in. It represents what a modern 32bit JRPG would look like, and it’s fantastic for it.

Octopath is one of those games that has a couple of flaws, mainly in its character interactions, as they’re kind of separated out from the rest of the game. However, there’s a solid turn based JRPG foundation with loads of flexibility and player choice in how you approach battles, and understanding the intricacies of party setup as well as the battle system itself to get past the game’s super boss. Seriously, that guy is a massive pain. Definitely make sure you’ve got a good understanding of your battle party’s skills, how they synergize, and how to quickly turn the tables of a near defeat- repeatedly.

So those were the games I finally finished after months or years, which means two games were effectively removed from the insurmountable mass of nonsense that is my backlog. Be sure to check back in a couple weeks to see another two random games I’ve played recently that I just think are swell.