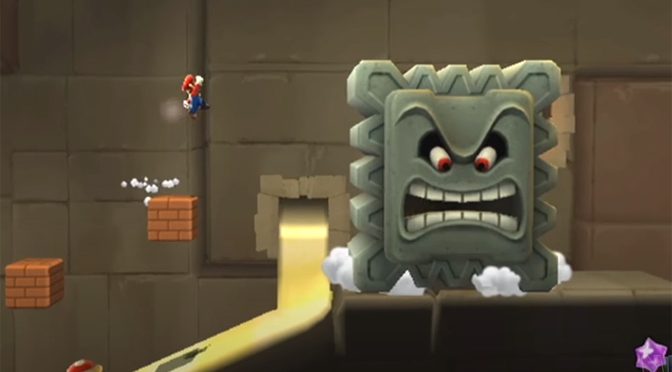 Welcome to Save State, where the sun is always shining… and golden. Well, jumping directly into it, a game that extricated itself from my backlog this week was Golden Sun for the Gameboy Advance, which actually fell out of a closet and hit me on the head. It was providence, I say, that led to me replaying an old game I never finished thereby wasting 20ish hours of my adult life.

Golden Sun is the story of Isaac, the boy who is not in Smash Bros. (yet). Isaac and his merry band of Psynergy-using Adepts are tasked with preventing the power of Alchemy from being released upon the world, which may cause wanton destruction as it did in ages past (or, as one could say, in ages lost). As you venture across the world of Weyard, this rag-tag band of psychic-magic children will encounter people in need of aid, plenty of new powerful abilities, and a turn based combat system with great graphics considering the game is legally old enough to smoke. 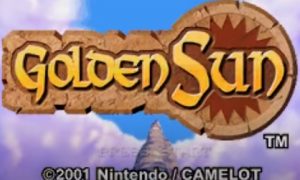 For the most part, if you’ve ever played a turn based RPG, you should understand Golden Sun’s combat system outright: You get into random encounters, and you select from a menu to do things like attack, cast spells, use items, or flee. There are status ailments and summons that can be used to turn the tides of a battle going poorly, but for the most part the game shouldn’t really be too difficult that you need to worry multiple turns ahead. There are also weapons, armor, and accessories that can be worn to further bolster your character’s abilities or help you customize your team how you like- pretty standard stuff. What really separates Golden Sun from a lot of its contemporaries was that its magic system, Psynergy, was tied into collecting little monsters throughout the game known as Djinn.

There are 28 Djinn in Golden Sun that the player comes across, either through the course of the adventure or through a battle somewhere off the beaten path. Each of these Djinn represent one of the six elements in the game, and provide stat bonuses and access to various elemental Psynergy (this game’s name for magic, basically) to the equipped character. Djinn can also be unleashed in battle, after which time they’ll go into standby mode where they can still be used to perform summons, but no longer provide stat bonuses to the equipped character. After being summoned, they enter their recovery state where they can’t be switched off their equipped character, though after spending some time in recovery they return back to their normal, initial state. 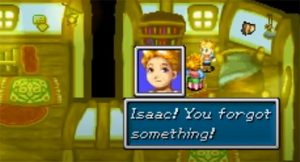 Since Djinn provide access to powerful Psynergy abilities by changing the equipped character’s class, accordingly. Generally speaking, you could play through the whole game equipping nothing but Djinn of the same element as the character using them and never leave their starting class (effectively leaving Isaac in Squire for the entire game, for example), though it can be useful to swap to off-element Djinn in order to access the Growth Psynergy outside of battle to reach new areas, which can often lead to new Djinn to fight.

Also, yes, you read that right- a game on the GBA allowed you to use abilities outside of battle in order to make exploration a little bit more dynamic. At the time of Golden Sun’s release, not many games did this in ways that felt intuitive- Wild Arms, for example, was a great early example, but Golden Sun carried the torch reasonably well throughout the early 00’s. Spells like Carry, Catch, etc., can be used to move objects or move them from a couple spaces away, while ones like Cloak can be super useful during a particular side quest. Beyond those quirky uses outside of battle, Golden Sun has a plethora of attack magic that can be used for dealing damage, buffing, and debuffing during battle, and the more Djinn you have, the more access to powerful Psynergy you have. 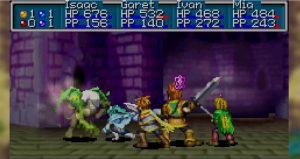 Golden Sun was a great little romp to return to for a short treat- the game lasts around 20 hours for a full playthrough, maybe about 25-30 for full completion. It wasn’t particularly stressful or overly challenging, unlike Yggdra Union, for example, but it was a fun, chill time and for some reason running around collecting Djinn all over the world of Weyard never really got old because it had some tangible benefits in combat in that it allowed my party to become more powerful a substantial portion of the time. If you enjoy JRPGs and are looking for something on the classic end of things, Golden Sun would be a great title to hop back into at some point.

I don’t have a particularly great segue for the next game I’ll talk about this week, as I was going to make some Elemental Stars joke but the way it was formatted I’d just wind up spoiling the ending for Golden Sun. So instead, I made a long, meandering sentence about how I wasn’t going to do that thing, without hitting backspace, because maybe that would spark your curiosity so you’d go check out Golden Sun. Either way, the next game for this week is Super Mario Galaxy, which recently just saw a re-release on the Nintendo Switch in Super Mario 3D All-Stars.

So we’ll get this out of the way first- yes, Super Mario 3D All-Stars is preying upon your FOMO, or your, “Fear of missing out.” There’s no two ways around that.

Also, I’m a sucker for a plumber in blue overalls and being able to play this game on my toilet was very alluring. Look, I don’t make good financial decisions, we all know this, that’s why my backlog exists in the manner in which it does- a nameless, faceless void bereft of any positivity that I, for some reason, keep adding to despite already having access to more games than I could reasonably play in my lifetime. Neal can yell at me about it later. Though, if you don’t know why I’m mentioning this it may be a good idea to check out the September 25th entry of Skirmisher last week.

In any event, I played Mario Galaxy on my Switch and, well, I actually quite enjoyed it. I never completed the game on the original Wii, and I for some reason found the game very non-memorable so I was able to return to it and play through as if it were my first time playing Galaxy. Some concessions were made to make it run on a Switch Pro controller instead of a Wii Remote, and by concessions I mean straight up improvements. Mario’s ever-important spin attack can now be performed with the press of a button, though gyroscope controls still exist to pick up star bits or use anything that involved motion in the original iteration (though now you can move your Pro controller around to do those actions, which I oddly found more comfortable though that could have been due to Splatoon’s influence).

Mario Galaxy is a weird combination of the 3D collectathon gameplay of Mario 64 and the linear gameplay styles of 2D Mario games, or Super Mario 3D World that came after it. You have a large spaceship that functions as a hub world, and when you pilot the ship you are effectively greeted with a world map screen a la Super Mario Bros. 3 and the like, replete with branching paths, options, and more. Once you pick a stage to play, you then get to select what “mission” you’d like to play, such as climbing up a mountain as a bee and scratching an itchy spot on the queen bee’s back (it’d be creepy if it weren’t so cute).

Another star may have you accomplishing another objective, but for the most part Galaxy has a more traditional, linear level design rather than open-ended worlds like Mario 64 or Odyssey. 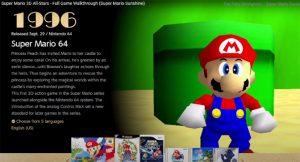 Of course, linear worlds are by no means a bad thing, and thankfully Galaxy’s stages are an absolute blast to play with tight level design. Being less memorable also isn’t a bad thing, you see, as familiarity can breed contempt. Some players absolutely hate the pyramid in Mario 64, and while there are some stages in Galaxy that made me go, “Well that’s just silly” they were fewer and far between because I wasn’t spending so long at each individual stage to hate going back through the same spots again and again. It’s drop in, do some entertaining platforming challenge, maybe turn into a bee and avoid water, grab your reward, and then move on to the next level. There are reasons to return to stages, of course, as some may have multiple stars that can be obtained, or harder versions of the stage may pop up with a time limit or some other kind of modifier, but for the most part they balance it out so you don’t just complete a level all at once, you might get the notification for the speed run version of the stage 5-10 levels later, so you typically shouldn’t be exhausted by any one level.

For the most part, everything in Galaxy just works. The graphics are bright and crisp on the Switch port, and the stages are designed in ways that hold up quite well even by gaming standards 12 years later. Power ups do return in Galaxy, though they are typically situational and are always part of some platforming challenge. Some worlds may require you use the Spring Mushroom to bounce through a precarious obstacle course, or that you use the Ice Flower to ice skate over water while dodging enemies. The game itself is actually quite easy outside of some places where it’s pretty easy to have an accident, but there are a couple stars that would cause someone to get frustrated (like the ones where you roll on top of a ball to the end of an obstacle course), but the difficulty curve is generally quite fair and on the easy side. 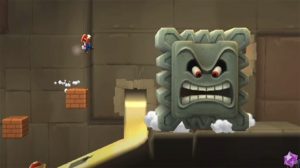 For the most part, Mario Galaxy is just fun. It’s a strong 3D platformer with great progression that still holds up in 2020; more so than I expected, in fact. A strong musical score and fantastic aesthetic design, this game is probably one of the easiest to pick up and play from the Super Mario 3D All-Stars pack. Of course, if you’ve played the original on the Wii, then there really is little reason to play this particular version unless you just absolutely hated shaking a Wii Remote to do your primary attack. This is actually a phenomenal little collection, and a great trip down memory lane (what of it I remembered for Galaxy, anyway!), but it’s a shame it won’t be sticking around for longer than a six month period.

That said, I think this wraps up this week’s entry of Save State. Join us next time when I put on my robe and wizard hat!