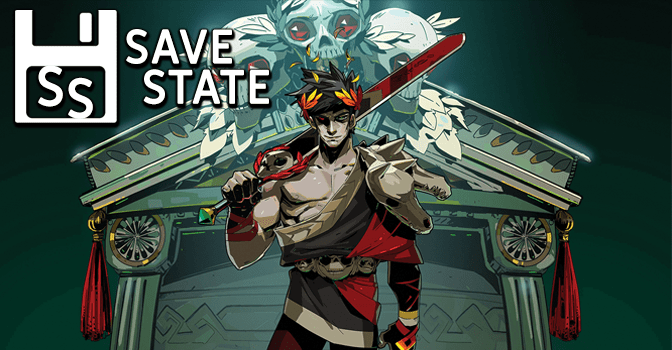 Welcome to Save State, where we have a hell of a good time. The last couple weeks haven’t been so great to your favorite backlog holder. Apparently, having poorly done dental work on a bottom molar can lead to an extremely nasty infection in the jaw that makes eating and speaking severely painful. So, I did what anyone would do: I played Hades for two weeks non-stop. Why not feel more pain while slaughtering wretches and failing to reach the surface time and time again? 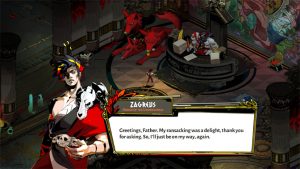 Hades is an isometric roguelite heavy on Greek mythology and challenge, especially when you’re playing the game for the first time. Hades rewards good positioning, quick reflexes, and good judgment when selecting which skills may best work with your given weapon. It’s a visually striking game with a simple gameplay loop that elegantly utilizes its art style to ingratiate itself with the player while telling a simple, yet solid, family story.

In this game, you control Zagreus, son of the god of the Underworld, Hades. Zagreus’s entire purpose for climbing out of hell is to meet his mother, Persephone, who lives on the surface below Mount Olympus. Of course, ascending out of the Underworld is no easy task, so the goddess Nyx connects Zagreus with the Olympian gods for assistance, forming the most interesting part of the Hades gameplay loop. While dashing and dodging through hordes of wretches and shades through the various chambers of the Underworld, you can find godly boons that will provide you with some kind of advantage you otherwise wouldn’t have, effectively forming the skill system of the game. 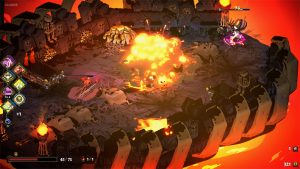 In Hades, you have a choice of six weapons to use in your climb out of hell, though all but the starting sword will need unlocked across multiple runs of the game. Each weapon will also unlock an additional 3 aspects which will change some manner of how the weapon performs, such as the Achilles aspect for the spear boosting all damage you do for a short time when you use its special attack. Each weapon has a primary attack and a special attack, and Zagreus starts each ascent with a basic dash and spell cast that can be upgraded with the abilities of the Greek gods.

With some runs of the game, you’ll have Poseidon’s ability to do a splashing water attack with your dash that can push enemies into walls and deal big damage to them, while on others you might be able to toss a slow, multi-hitting shield that causes Zeus lightning strikes to annihilate all of your enemies for you. There’s even some wild life steal and dodge setups you can use, though your mileage with those may vary on that depending on your play style. There’s a ton of permanent upgrades you can make as you play, plus Daedalus Hammer upgrades, Chaos boons, and Infernal Gates that will help you clear out enemy-filled chambers like never before. 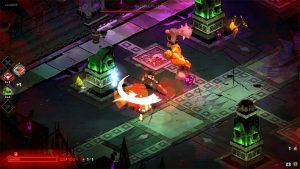 For the most part, the gameplay of Hades is super simple and extremely easy to understand. You walk into a room, you eliminate all the wretched within, and then you move on until you hit a boss chamber. Oftentimes, you’ll be presented with choices of which rooms you’d like to visit, and you can decide which is best to aim for since the game shows you what your reward will be if you clear the chamber. There’s quite a bit of RNG you’ll be subjected to throughout your adventures in Hades, but thankfully if you’re flexible, you can almost always generally have some form of a synergistic build ready by the time you hit the later areas of the game, especially once you unlock Keepsakes that guarantee you encounter a specific Olympian god.

With each run, you’ll acquire game knowledge, but also valuable trinkets that aid you in your next ascent. Darkness you acquire can be spent on the Mirror of Night to offer powerful passive abilities, such as greater damage for hitting foes in the back, or greater chances to acquire Legendary and Duo boons from the Olympian gods. Chthonic Keys you find each escape can be used to unlock new skills from the Mirror of Night or to unlock new weapons, while Gemstones you collect can be used to add Fountain rooms you may randomly discover, and to cause fountains to recover more health, among many other permanent bonuses you can add to the dungeons or House of Hades. There’s several more artifacts you’ll acquire as you do more escapes, some used to upgrade your weapons, others used to become better friends with the various characters, and more. 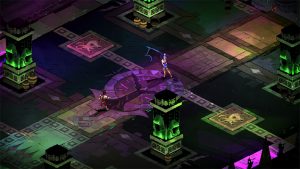 It’s extremely difficult to overstate the, “Just one more run” syndrome present in Hades. As a roguelite, it’s very accessible in spite of its difficulty because the more you fail, the stronger you become for your next escape attempt. Hades is nowhere near as challenging as some of its contemporaries in the roguelite genre, because even with my aging reaction times, I was still able to clear Hades in under 5 runs- which should say something. Of course, in order to complete the story of Hades, you’ll need to clear the game around 10 times to have the full plot unfold, and even more than that to clear the epilogue. While this may seem like a lot, you’ll be discovering new, powerful synergies as you go, and seeing that you cleared a run in under 15 minutes while goofing off can be a pretty powerful motivator of its own.

A friend of mine was watching me play Hades, during which time I was barely communicating due to the aforementioned trouble speaking, but according to him, the game is enthralling to watch. On my third run, I made it all the way to the final boss without much difficulty due to some great boon synergy, though I did lose most of my health bringing him down. While the text box hanged on screen, through the jaw pain I declared, “Easy game for babies.” Then I pressed the A button again, the final boss got back up, refilled his health gauge, and mercilessly slaughtered me. You would think with all the JRPGs I play that I’d have accounted for the inevitable second boss phase. Counting your chickens before they hatch, and all that. 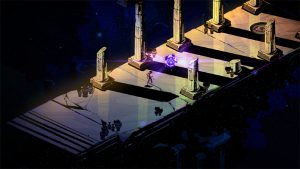 What’s fun about Hades is lucking into extremely powerful, synergistic builds while still learning the systems and what makes them good. While my first 3 attempted escapes from the Underworld didn’t go anywhere near as planned, I wound up somehow getting boons from both Demeter and Artemis which turned my spell cast into powerful crystal turrets that tracked my foes and shot lasers at them. Assembling the combination of these boons with the spear meant that using my spear’s special would boost the damage of my homing laser turrets, so my fancy turrets practically beat the final boss for me while I dashed around like a coward.

Every single weapon is useful with some combination of godly boons, and the best part of Hades is that you’re not entirely at the whims of RNG. Sometimes a build won’t come together by the final areas because you simply weren’t offered the right boons, but generally you can make about anything work assuming you get at least one Olympian god that synergizes well with your weapon. For the most part, you can get a feel for this as you play. If you’re using a fast-hitting weapon like the railgun that deals 10 damage per shot, you’ll get more out of flat damage bonuses that add 20 to your attack than you would a +50% damage increase to your attack (30 vs 15, just as an example), so after just a few runs with a specific weapon you should be able to figure out what works well with it, and can then use a Keepsake of your favorite god to force their boons into your next run. 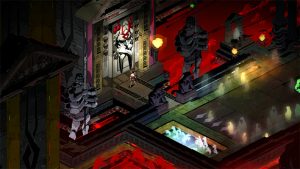 There really aren’t any negatives to Hades I can think of, other than being a little difficult at first while you get acclimated to the controls and learn what each god offers and what Daedalus upgrades are present for each weapon. Sometimes the Adamant Rail weapon will absolutely suck and deal very little damage because the wrong boons were selected, and then in your next run you’ll acquire the Rocket and Cluster Bomb upgrades with Zeus and Poseidon boons, and suddenly pressing the special attack button will clear entire rooms by smashing foes into walls, dealing hundreds of points of damage. Discovering powerful synergies really does make the game quite addictive, because while you may hate one weapon due to it not really “coming together” one run, a new escape attempt is a new opportunity to assemble some broken combination that will singlehandedly lead you to victory!

Of course, if Hades were too easy, then this title would be boring to play. But the extremely unique Pact of Punishment system in Hades goes a long way to keep the player invested. The Pact offers a way to mix up your escape attempts by introducing new challenges- such as enemies having a shield that absorbs the first hit of any damage you may do, or puts you on a time limit to clear each Underworld region. The Extreme Measures pact completely revamps the boss fights or changes the arenas in which you fight the bosses to be more dangerous, while some others may just give enemies 15% more health. If you weren’t up for the additional challenge, you could just play on Heat 0 forever, but it’d probably take hundreds of hours to acquire all of the Chthonic Companions or upgrade all of your weapons. 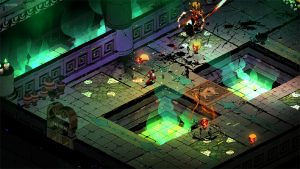 Each of the 15 Pact modifiers have different levels, and continuing to up the Heat will reward the player with valuable items like Ambrosia or Titan Blood, the latter of which is necessary to upgrade the aspects of your weapons. The different Pact options really run the gamut, and what you select is entirely up to you. This system basically allows you to tailor the difficulty how you would like, and clearing Heat 16 and 32 were great ways to remember that Hades isn’t just fun- it’s Hell.

Hades is one of those great titles for people who like to challenge their own high scores, or enjoy seeing what nonsense combination of abilities they can come up with and still complete a run of the game. If you don’t like roguelites, Hades might still be a game to try, as the visual panache, great voice acting, and expressive embrace of lore may make a fan out of you. If you don’t like games that challenge you, however, Hades may be one to stay away from, as it strongly encourages players to keep raising the difficulty in order to keep acquiring unique upgrade items through the inventive Pact of Punishment system. 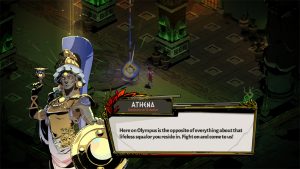 With all that being said, though, I think I’ve gushed enough about Hades for one day. Join us on the Save State column in another couple weeks where I may talk about yet another roguelite – or maybe just popcorn. I do love me some popcorn.